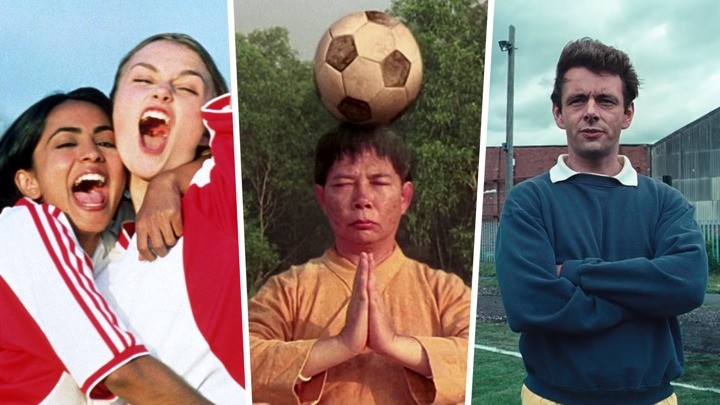 The paint-by-numbers underdog tale of an unfancied team or player triumphing against all odds is all too common.

Add to that the challenge of filming a convincing football match using teams of actors, and it can feel like finding a good football film to watch is more of a challenge than it’s worth.

Luckily, there are some real gems out there. But which is the best?

A simple story told in an unusual way can be a powerful combination.

After meeting Hong Kong football star Fung, Sing reunites his five fellow masters to use their martial arts skills to play football and bring kung fu to the masses.

At the time of release, Shaolin Soccer was the most successful film in the history of Hong Kong cinema before being topped by Chow’s next martial arts comedy, Kung Fu Hustle.

Ken Loach’s 2009 offering Looking For Eric is not so much about football itself as it is about the relationship between football and its fans, and the humanity of the celebrities it produces.

Eric Cantona had already been appearing in film and TV for nearly 15 years by the time this was released, and the Manchester United legend’s performance was broadly well received.

After smoking cannabis stolen from his stepson, postman Eric Bishop’s life is pulled back on track by the advice he receives from a hallucination of footballer-turned-philosopher Cantona.

Loach’s film treads a fine line between the escapism of football and the grittiness of reality, and it treads it well.

One of the first feature films to centre around football, The Arsenal Stadium Mystery is fairly self-explanatory – a murder mystery set at Arsenal’s former ground of Highbury.

Featuring legendary Gunners manager George Allison alongside a number of players and staff, the film follows the mystery of a murder at a game against fictitious side The Trojans.

One of the Trojans’ players drops dead, poisoned during a match against Arsenal – with match footage taken from the Gunners’ 1939 game against Brentford, their last before the Second World War.

The murdered player’s team-mates and former mistress are questioned by Detective Inspector Slade as the mystery plays out.

Proof that a film doesn’t have to be good to be great.

Both Buddy and owner Josh enjoy fledgling romances, with the former bouncing back from his side’s expulsion from their soccer league – ignoring the spirit of one of the all-time great cinematic lines from the original, “Ain’t no rules says a dog can’t play basketball”.

Johnson’s life of drinks, drugs and sex is interrupted by an epiphany during a clash with Tottenham’s hooligan firm, while his friend Rod King pursues a romance with Tamara, the court clerk from their resulting arraignment.

The film builds up to a clash between Chelsea’s firm and that of Millwall, with characters beaten, arrested and murdered along the way.

A gritty study on the violence of a man bored with his life, and the sense of belonging offered by his weekly football fix.

Vinnie Jones and Jason Statham star in this adaptation of 1974 American football comedy The Longest Yard.

Jones stars as disgraced former England captain Danny ‘The Mean Machine’ Meehan, banned from the game for match-fixing before being imprisoned for drunkenly assaulting a pair of police officers.

Meehan gradually adapts to life behind bars and begins coaching a team of inmates for a match against the warden’s team. Meanwhile, the warden attempts to win back the money he owes to dodgy bookmaker ‘Barry the Bookie’ by betting on his side.

Among the most popular football films ever made, the first instalment of the Goal! trilogy sees poor Mexican busboy Santiago Munez leave Los Angeles for the bright lights of Newcastle.

Munez’s journey to the top is interrupted by friction with his new team-mates, his own secret struggles with asthma, and the death of his father back in the USA.

Made with cooperation from FIFA, the film features dozens of real footballers including the likes of David Beckham, Zinedine Zidane, Ronaldo, Thierry Henry plus big sections of the squads from Newcastle and Liverpool, who go head-to-head in the big match at the end of the season.

The film remains a cult favourite among football fans.

Starring Parminder Nagra and Keira Knightley, Bend It Like Beckham was a critical and commercial hit, and remains a cultural reference point for many.

It follows teenager Jesminder ‘Jess’ Bhamra, who rebels against her conservative Indian Sikh parents by joining a local football team.

At once inspiring, thoughtful and genuinely funny, the film’s commentary on issues of race and multiculturalism in modern Britain remains relevant and well-pitched, and a stage musical version began in London’s West End in 2015.

Based on David Peace’s best-selling novel, The Damned United charts the rise, fall and rise of a young Brian Clough alongside his growing rivalry with legendary Leeds boss Don Revie.

Stylish and well-paced, Michael Sheen’s exquisite portrayal of Clough is eye-catching and memorable, aided by his genuine footballing ability – his chest, turn and volley, quipped with “I’d like to see Don f*cking Revie do that” is one of a number of stand-out moments.

Director Tom Hooper sets Clough against two characters. Rival Revie brings out the fire in his character, while assistant and friend Peter Taylor focuses his genius.

The relationship between Clough and Taylor is a delicate, moving one, though Clough’s family and a number of the real figures portrayed in the film have been critical of alleged inaccuracies in it.

It is difficult to imagine a football film ever coming close to Escape To Victory’s enduring mass appeal, with the 1981 classic remaining a Christmas Day staple in many British households.

Based on the 1962 Hungarian film Two Half Times In Hell, the likes of Sylvester Stallone, Michael Caine, Pele, Bobby Moore and Ossie Ardiles star as Allied prisoners of war planning a daring escape from a Nazi POW camp.

The plan goes awry, but a chance to escape opens up at half-time in the game with the prisoners trailing 4-1.

But, in true cinematic style, they decide to play on – “We can still win this” – and heroically fight back to secure a draw, before escaping in the post-match confusion as spectators storm the pitch.

It isn’t a perfect film. But for many, it is the perfect football film.