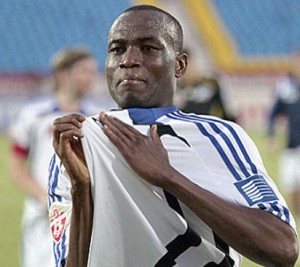 The 28-year-old was released from his contract in 2008 by Russian club Saturn due to a nagging ankle injury and has since not played in a competitive match.

However, Iliasu has been handed a career lifeline and has already made four appearances for the Dilijan-based club.

His impressive showing at the Mundial earned him trials at English clubs Arsenal and Blackburn Rovers but eventually signed for Saturn.