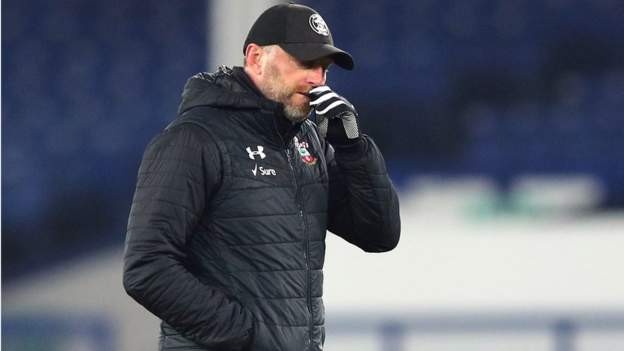 Southampton manager Ralph Hasenhuttl told his side "anything is possible" when they went top of the Premier League table for the first time in their history in November.

He probably didn't have a relegation battle in mind.

But after three wins in their following 17 games, he says they do not yet have enough points - 30 -to stay in the league.

With a mounting injury list, Saints have lost eight and drawn one of their past nine matches and the good vibes from that win over Newcastle 16 weeks ago seem a distant memory.

If they carry that form on for the rest of the season there is a real possibility they will be relegated.

"If I was in the Southampton changing room I'd probably be pretty fearful about going to Sheffield United," said Leon Osman after witnessing the Saints' 1-0 defeat by Everton for BBC Radio 5 Live.

The Saints, who are 14th on 30 points, visit the Premier League's bottom side - who have won only three games all season - on Saturday.

Fulham, in 18th, play Tottenham on Thursday, so what is now a seven-point cushion above the relegation zone could be reduced still further by the time they kick off at the weekend.

"Thirty points is not enough to stay in the league - we need points and maybe next weekend," Hasenhuttl told BBC Sport.

"We are in a moment where we are short of scoring goals and that makes it difficult to win. We are struggling to put the ball in the net. [Despite] the problems we have at the moment with the injuries and the run that we are on, I saw a team that was fighting until the end. I saw spirit.

"Everybody knows that getting the first win is the most important and we are fighting for it."

Southampton's only points in 2021 have come from surprising sources - a 1-0 win over Liverpool on 4 January and a 1-1 draw with Chelsea nine days ago.

"You thought the draw against Chelsea would kick-start their season again but it hasn't," said Osman. "There will be real questions for Ralph Hasenhuttl and then in due course that he'll ask his players.

Southampton were top on 6 November. Now they are 32 points behind leaders Manchester City - who were 10th at the time

"This doesn't seem to be the Southampton team that we were watching before Christmas. We thought they were competing for the top four at one point. They look like a side that has fallen off the edge of a cliff.

"Not only can they not keep clean sheets, they look like they are lacking confidence. They are passing the buck in front of goal."

Southampton have won just one point from the last 27 on offer in the Premier League - with five consecutive away defeats for the first time since May 2015. In contrast, Fulham have picked up 11 points from their past nine games.

All six teams below Southampton have won at least one of their past five matches.

But the Saints are remaining confident.

Southampton defender Jan Bednarek said "there is always sun after the rain".

"It is very frustrating because we tried hard, and it's not going how we want it to," he told Sky Sports. "Hopefully it'll be a massive lesson for us, and it will improve us in the future. It's a tough moment, but we've got to work hard and stick together as a team."

Hasenhuttl believes his side will be safe and told BBC Radio 5 Live he is lucky he does not need to worry about his position.

"We have shown that we can be a different side also," he added in a post-match news conference. "It's hard work to do, but when you know us as a club and team and what we have done in the past you can be sure we will find a way out."

Southampton are seven points above Fulham and the relegation zone but if both sides keep up their current form, the Cottagers will overtake the Saints

Sounds of the Nineties: Weezer, Green Day and more on the ultimate pop-rock mixtapeNintendo Nostalgia and games for phones: Press X to Continue hosts Tom Grennan