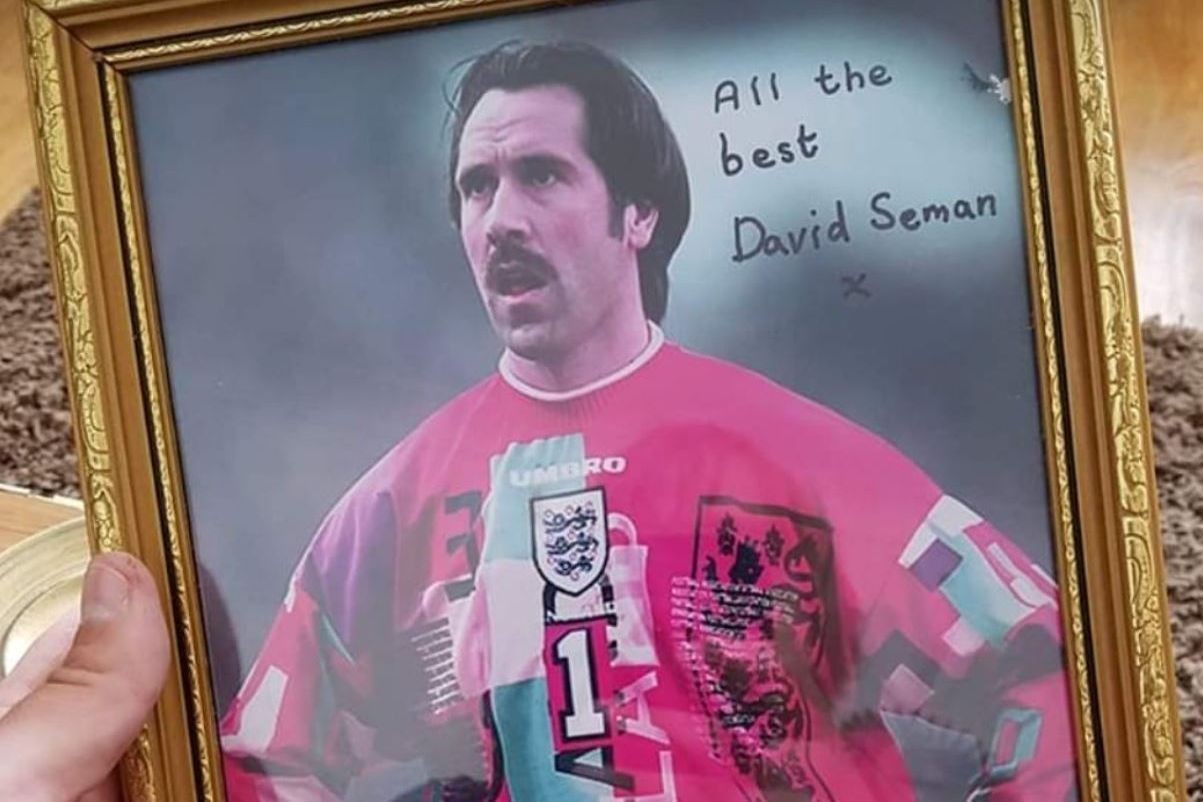 Former Arsenal and England goalkeeper David Seaman got a surprise this week after a picture supposedly bearing his signature was put up for sale on Facebook Marketplace.

Jump to: Barca's Pique zooms in for match on electric bike | Alisson's brother takes his turn to be hero goalkeeper | Club gives fan jersey to get married in

The framed image soon went viral after it was immediately spotted that the autographed image of Seaman tending goal for England during their Euro '96 semifinal against Germany might not be entirely genuine.

The £5 item, pictured with a marker pen in shot, even caught the eye of Seaman himself, who questioned who had scribbled "All the best" next to his image.

No doubt while giving a trademark chuckle, the 56-year-old quote-tweeted a screenshot of the listing asking: ""Signed by who???!!!!"

Of course, the seller technically never claimed the picture to be signed by Arsenal's legendary goalkeeper, but by "David Seman" -- a different chap entirely. And the presence of the Sharpie in the picture does raise questions about the seriousness of the posting.

Still,if you think it is worth a fiver (plus postage and packaging from Hull) then it could be yours.

Barca's Pique zooms in for match on electric bike

Gerard Pique took advantage of the reduced traffic levels in Barcelona to cycle through the city to Camp Nou for Wednesday night's derby against Espanyol.

The defender, who lives roughly three kilometres from the stadium, was spotted darting into the car park on his electric bike before the game.

Pique would have given any members of the club's coaching and medical staff a real fright if any of them had seen him fly past an assembled crowd of media and fans and disappear down a ramp into the bowels of the stadium, fearing one wrong move would cause a crash that could rule him out of the run-in of the title race with Real Madrid.

Still, Barca went on to win the game 1-0 with Pique playing the full 90 minutes, after which he presumably cycled home again.

Alisson's brother takes his turn to be hero goalkeeper

[email protected] allowed their team doctor to lift the Campeonato Carioca trophy, in honour of medical professionals across Brazil. pic.twitter.com/zF8VW06C7E

Fluminense won the final of the Rio de Janeiro State Championship on Wednesday after beating cross-city rivals Flamengo on penalties.

The game finished 1-1 in normal time, but Flu eventually emerged victorious thanks to two vital saves from goalkeeper Muriel Becker.

If the name sounds familiar, that is because Muriel is the older brother of Alisson Becker, whom you may recall recently won the Premier League with Liverpool and was Man of the Match in their Champions League final victory last season.

Muriel saved penalties from Willian Arao and Rafinha as Flu took the shootout before letting their club doctor lift the trophy in tribute to all the medical professionals assisting in the fight against coronavirus in Brazil.

Club gives fan jersey to get married in

A Malaga fan, Alberto Romero, fulfilled his promise to get married wearing a Malaga jersey. Romero tweeted a photograph of Wednesday's ceremony where he is seen exchanging rings with his partner, Esther, wearing his beloved team's shirt with the message: "A promise is a promise."

Romero had previously written to the Segunda Division club a tweet that said: "Hello Malaga CF, on Wednesday I'm getting married in the civil registry and I promised my wife that it would with your jersey...she opposes but...a blanquiazul promise has to be fulfilled. How about gifting me with this season's jersey for the wedding? I promise a photograph." Malaga simply replied: "DEAL!"

Romero says that when their son was born and money was tight, he and his girlfriend had to give up their Malaga membership.

"I told her at the time that the day we get married I would do so wearing the Malaga jersey," he said. "I had the jersey of the [2017-18 season] relegation and I didn't want to get married with that one on in case it would give me bad luck and that is why I asked the club for the new one."

For Romero it was a double celebration as Malaga won 1-0 against Deportivo La Coruna on Wednesday to take a giant step towards defending their Segunda Division status.

Malaga CF were the first ones to congratulate the couple. The club tweeted: "We didn't doubt your word, Alberto! Impossible to be more elegant. The blue and white is always a success. Congratulations! We wish you all the happiness in the world!"