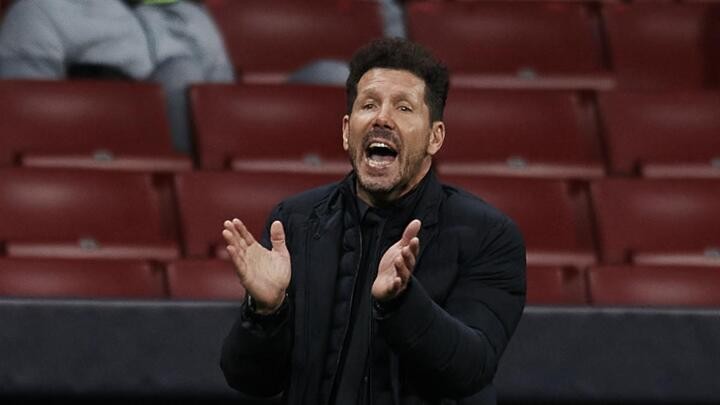 Atlético Madrid were held by an understrength Bayern Munich, leaving Diego Simeone acutely aware of where his side needs to improve.

Diego Simeone acknowledged a failure to take their chances cost Atlético Madrid, as his side were punished late on in a 1-1 draw with Bayern Munich. Atlético went into Tuesday's Champions League clash with holders Bayern knowing that victory would be enough to secure second place in Group A. João Félix gave the hosts the lead with his eighth goal in 14 appearances this term, but Atleti could not score from any of their other 12 attempts, of which only three were on target.

A weakened Bayern, without regulars such as Robert Lewandowski and Manuel Neuer, grew as the game wore on, snatching a draw through Thomas Müller's 86th-minute penalty. It means Atlético now need to avoid defeat at Salzburg in their final group game next week to qualify for the knockout stages, and Simeone is fully aware where his side must improve.

"We are not being forceful enough in attack, but we do create chances," the coach told Movistar Plus. "Now we have a very tough game against Salzburg. A small scoreline means you can always be caught. But until the penalty, Bayern had no chances to score."

Atlético were again without Luis Suárez because of coronavirus, while fellow striker Diego Costa has endured another injury-plagued campaign. João Félix impressed against Bayern, managing more shots (three) and shots on target (two) than anyone else on the pitch, as well as playing a joint-high two key passes.  The Portugal international's goal came from a Marcos Llorente assist, and Simeone can see signs of improvement in the attacking third, even if Atleti have failed to score more than once in any of their past four games.

"It would not be fair to speak about the attacking players. Luis is missing through coronavirus, Diego is in his recovery phase and will be out for longer," he said. "The work we are doing is good, but we have to work harder on finishing situations. We are working on that in training. The players are working hard and are in good shape. It is not easy having this forcefulness that will solve our issues. In these situations we will only improve. I liked the move for the goal... [Yannick] Carrasco's pass to Llorente. We are already showing signs of more tranquility."

Joao Félix agreed with Simeone that chances created ultimately count for little unless they are converted.  "We had more opportunities than them but did not take them," he said. "These things can happen in football.  We can have many opportunities but if we do not score them, they are worthless. They only had a few and one of them was enough to earn a draw."

Bayern did not register an attempt on target in the first half - the first time that has happened in a Champions League group game since October 2009.  But it was roles reversed after the restart as Atletico failed to test stand-in Bayern keeper Alexander Nübel - one of nine players brought into the visitors' starting line-up.

"The first half was very good for us," Simeone added. "It was a beautiful goal, and we were close to a second but it just did not come. Bayern are a strong side and won a penalty. Next week's game [with Salzburg] will now clearly be another final."