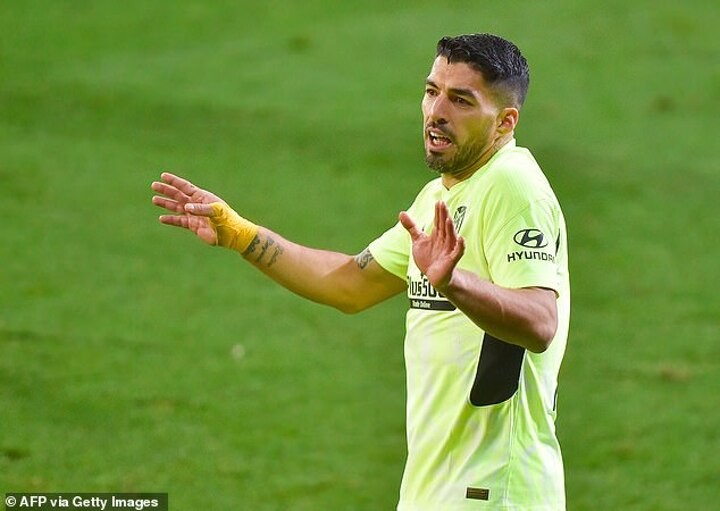 Simeone believes Suarez has brought the 'desire and energy' he expressed on the phone to Atletico Madrid this season.

Since his arrival in September, Suarez has become LaLiga's joint-second top scorer – tied with his former Barcelona team-mate Lionel Messi on 11 goals.

Sevilla's Youssef En-Nesyri is currently leading the pack as top goal scorer – although both he and Messi have played more games than Suarez.

Speaking of his phone call with Suarez, Simeone said: 'The moment I spoke with Luis on the phone I found what he gives on the pitch: a lot of desire and energy.

'The team helps him to be at his best, which is scoring, something that has marked him throughout his career.'

Atletico are currently top of the LaLiga table, sitting 20 points ahead of his former team, Barcelona.

Suarez's glory at Atletico has come after he was pushed out of the door at the Nou Camp by Ronald Koeman.

Suarez will be keen to look forward, rather than back, as Atletico have the opportunity to stretch their lead at the top of the table when they play Valencia on Sunday.

Suarez will be hoping to increase his tally against Javi Gracia's side – who sit 14th in the table, having failed to win any of their last 12 games against Atletico.

Simeone believes that game will provide a good opportunity for Joao Felix to rediscover his best form.

Simeone says Felix can 'unbalance' an opposition's defence and that he can provide Atletico 'different solutions'.

'You always seek to focus on a footballer,' Simeone said. 'They have good, average and extraordinary moments, and as coaches we try to take advantage of every players' moments.

'We need Joao. When he is at his best, he can unbalance [the opposition's defence] and give different solutions. We need him in that version. It's what we are looking for in training.'