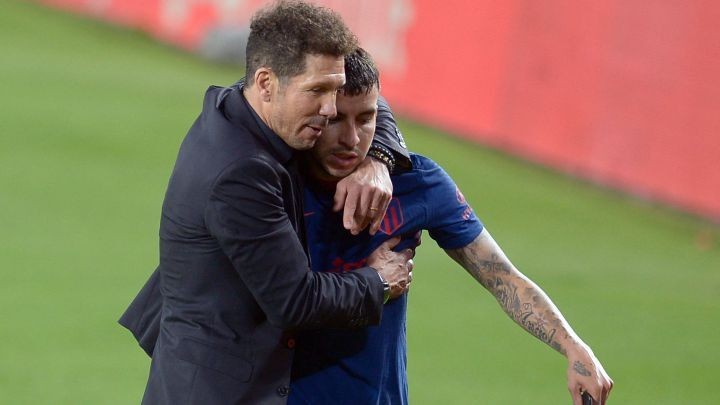 Diego Simeone called on hobbling Atlético Madrid to "resist" in their LaLiga title hunt as the club's injuries pile up following a 1-1 draw with Real Betis.

Atlético returned to the top of the table, ahead of defending champions Real Madrid and Barcelona, after sharing the spoils at Betis in a thrilling encounter on Sunday.

Already without Luis Suarez, Marcos Llorente, Moussa Dembele and Geoffrey Kondogbia due to injury, Atletico saw star Joao Felix suffer an ankle injury, while full-back Kieran Trippier had to be replaced with a back injury.

Simeone: "We are in a moment of resistance"

As the injuries mount, Atletico head coach Simeone said: "In the second half we suffered. But I have footballers who give everything.

"We are in a moment of resistance. Resist, that's a word that appeals to me. Resist, like all of society in these difficult times."

Chasing four home wins in a row for the first time since April 2018, Betis had the better of the second half, though Atletico goalkeeper Jan Oblak stood firm when called upon and his counterpart Claudio Bravo made a superb late stop from Angel Correa to preserve a deserved point.

Atlético have scored 52 goals after 30 league games this season (1.73 goals per game). The last LaLiga winner with as few or fewer goals at this stage of the season were Fabio Capello's Real Madrid in 2006-07 (42 goals).

Correa has delivered 10 assists in all competitions this term, equalling the best tally in his six seasons at Atlético (level with 2016-17 campaign). The Argentinian has scored only four goals, however, which is his lowest tally at this stage of the season.

Simeone added: "We will see what happens, all the teams have a moment of irregularity and hopefully we have passed it after today's draw.

"We have maintained a firm and strong step this season as both Madrid and Barcelona have begun to recover so we will wait and see."