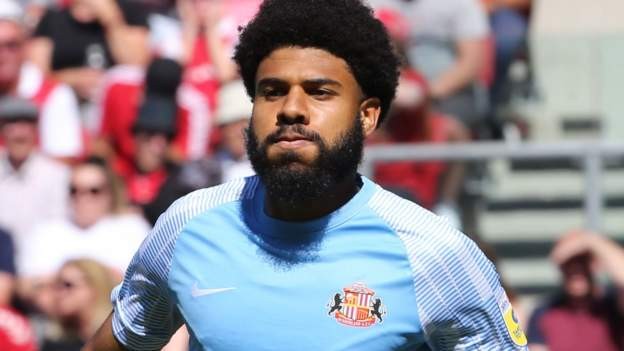 Debutant Ellis Simms scored twice on his debut as Sunderland came from 2-1 down to beat Bristol City 3-2 in a pulsating Championship clash at Ashton Gate.

The Everton loanee began his season-long spell at the Wearsiders in excellent fashion with the opener after just four minutes, but just six minutes later Andreas Weimann levelled as City created some good early chances.

Chris Martin put the hosts ahead six minutes after the break, but Simms levelled soon after and then forced a superb save from Dan Bentley.

Ross Stewart headed Alex Neil's men in front again before Dan Ballard superbly blocked an effort from City's Rob Atkinson while Martin missed a good chance as the hosts tried in vain for an equaliser.

Having drawn 1-1 with Coventry City last week the win was Sunderland's first in the second tier since a 3-0 win over champions Wolverhampton Wanderers on the final day of the 2017-18 season.

Bristol City's defeat means they have lost their opening two league games for the first time in seven years.

Robins' boss Nigel Pearson had planned to name an unchanged side from the one that lost at Hull City last week, but Matty James was injured in the warm-up so Han-Noah Massengo deputised - and 15 seconds in the French midfielder was fouled by Corry Evans to receive what may well become the fastest yellow card of the season.

The high-tempo start to the game continued when a loose backpass by Kal Naismith was intercepted by Stewart, who found Simms on the edge of the box and the 21-year-old blasted home into the bottom corner.

City's Jay Dasilva had a good effort saved before Wiemann marked his 150th appearance for City with his second goal in as many games as Zak Vyner found the Austrian who took a touch and powered home from just inside the penalty area.

City could have made it 2-1 three minutes later but Dasilva dragged his shot wide, while Martin had an effort cleared off the Sunderland line by Jack Clarke after good work by Alex Scott.

Sunderland ended the half well as Simms blasted over before Evans had an effort well saved by Dan Bentley, but it was City who started the second half better as Martin's close-range effort trickled over the line after a cross from Weimann.

But again a quick equaliser followed as England Under-20 forward Simms - whose only Everton appearance came for a depleted Toffees side in a 1-1 draw at Chelsea last December - shot through Bentley's legs after good work by Alex Pritchard.

Sunderland began to grow in confidence in their first away game in the Championship since April 2018 as Simms had a penalty appeal waved away after an hour before forcing a superb point-blank save form Bentley a minute later after Clarke's pull back.

Ten minutes later Sunderland were ahead again - the impressive Clarke setting Pritchard free down the wing and his cross was headed home by Scotland forward Stewart for his first goal of the season.

City should have levelled soon after, but Ballard superbly blocked from Atkinson while Martin turned an 85th-minute cross wide from two yards out.

"There's areas of our game that just need to be tightened up, but no accounting for individual mistakes, it's very disappointing for us.

"Five goals in two games is a big concern, so whether we have to change our style of play to make it a bit more messy and ugly to try and get results if we're going to to play the way that we do.

"I thought we created some good opportunities today, which we should have taken, but when you continue to concede goals in the manner that we do it's a real concern.

"The goals that we conceded today were awful, all three of them. I can't say that we've been carved open by fantastic play, we've conceded three poor goals."

"I thought we played well in the game. We pinned them in, I thought we moved the ball a lot smoother and our choice of pass was better.

"We looked a bit nervous in the first 15 minutes, which is unlike us, and that was a frustration of mine because we shouldn't be.

"But we got confidence the more the game wore on."

Alex Scott (Bristol City) wins a free kick in the defensive half.

Attempt saved. Lynden Gooch (Sunderland) right footed shot from outside the box is saved in the bottom right corner.

Attempt blocked. Elliot Embleton (Sunderland) left footed shot from the centre of the box is blocked. Assisted by Ross Stewart.

Attempt missed. Kal Naismith (Bristol City) left footed shot from outside the box is close, but misses to the left.