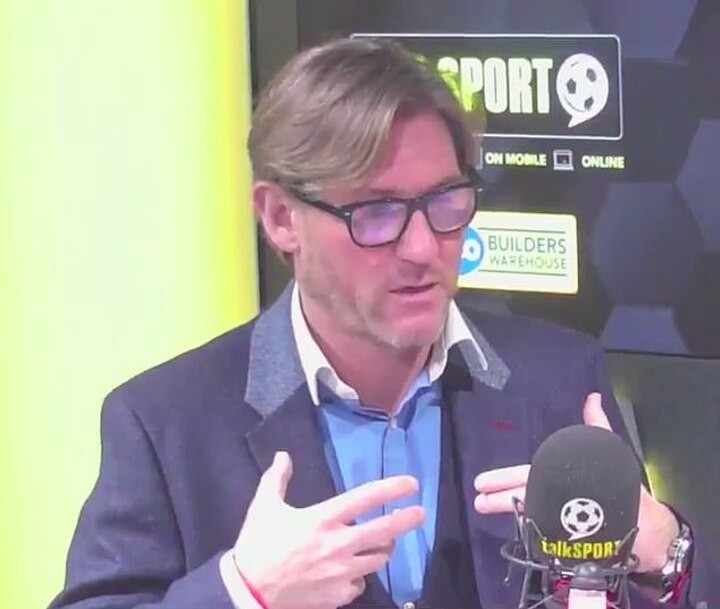 Simon Jordan has laid into Premier League footballers who celebrate goals by hugging their team-mates - claiming players are unwilling to follow Covid rules and that clubs 'don't have the balls' to enforce them.

In an extraordinary rant, the former Crystal Palace owner also took a swipe at managers for failing to discourage their players against embracing and said they had 'zero authority' in enforcing protocols.

Football has come under fire in recent weeks after a dramatic rise in cases among players while the game continues during the UK's third lockdown. Sportsmail reported on Thursday that the Premier League have set up a series of urgent meetings with captains and managers to address new covid restrictions amid fears of a government intervention.

There has been a growing frustration from ministers about football's failure to get tough on breaches of Covid rules after a handful of top flight players were criticised for hosting or attending parties over the festive period.

Players were told that they should avoid hugging, high-fives and handshakes, with sanctions promised for breaches. However, top-flight matches since the protocols were sent out have seen repeated instances of group hugs following goals. Sheffield United and both Manchester clubs are among those to have celebrated as normal.

The Premier League and EFL have sent guidance to their clubs warning them of their responsibilities, but Jordan isn't convinced footballers will listen to the warnings.

'The players will not do as they're told and do not think they have to, and find reasons why they shouldn't and the managers have zero authority,' he told talkSport. 'In fact, the managers condone it.

'If this were me and this were my group of players, I can assure you unequivocally, I would walk into that dressing room as owner of that football club and say to those players, with all the best will in the world, "I'm not asking you, this is not a request, It's not a guideline - I'm telling you: cut this out. I don't care what wonderful little routine you want to practise on the training ground for a socially distanced goal celebration, do as you're being asked or we're going to have a problem.

'"You are massively respected, massively rewarded, I value you highly but you will do as you're bloody well told."'

Jordan believes the risk of sanctions from the Premier League are 'an empty threat' and feels the clubs won't tell their players not to celebrate together because 'they haven't got the balls'.

I think it's an empty threat (sanctions) if it comes down to sanctions being in forced it has to be the Premier League because they can't leave it to the clubs, the clubs don't have the balls.

'The Premier League is the sum of its parts, and the parts are the 20 clubs, and to bring these rules in they've got to get the 20 clubs to vote for them, which means the 20 clubs that don't have the balls to say to these players, "do as your told"'

Jordan went on in his tirade that 'superstar' players need to come back into 'the real world' and took aim at managers like Pep Guardiola and Roy Hodgson for not being tough enough with Covid rules.

This week Hodgson admitted it would be 'difficult' to stop players celebrating and suggested they would be safe as they are tested regularly.

'The players are superstars, they're outside the parameters of the real world, and then we say to them "back into the real world you come",' he added.

'It's about having the courage of your convictions. And then you've got Pep Guardiola and Chris Wilder and Roy Hodgson saying "well you dont know because you haven't played".

'We've all had massive moments of joy in our lives. We won the play off final in 2004. It was the embodiment of all my dreams of a football club I've bought and spent tens of millions of my money on and watched my father play for.

'I went on the pitch and I wanted to keep myself together because I wanted to reserve my emotions for different time. Of course you can control yourself - these players don't celebrate when they play against the sides they used to play for.

'These players can do what they want to when they want to. It's another example of they don't think they have to.'

Before Tottenham's 1-1 draw against Fulham, forward Harry Kane promised players would abide by the rules and not embrace, and he was as good as his word as he opted for a high five after putting Spurs in front in the first half.

But Fulham players appeared to ignore the rules completely as the team huddled together following Ivan Cavaleiro's late equaliser.

Ministers have made it clear they don't want to see images of footballers flouting social distancing rules at a time of national crisis, and such actions make it harder to justify the continuation of elite sport during a national lockdown.

Football has been criticised heavily in recent weeks after a number of footballers were seen attending or hosting parties over the festive period during a real time of struggle for the country.

Speaking to the Telegraph, Julian Knight, the chairman of the Parliamentary Department of Culture Media and Sport Committee, slammed the 'brainless' behaviour of footballers who disobey the rules.

'These people are looked up to, they're role models, and not to respect any form of social distancing in that way – at a time of national emergency – is brainless at best and negligent at worst,' he said.