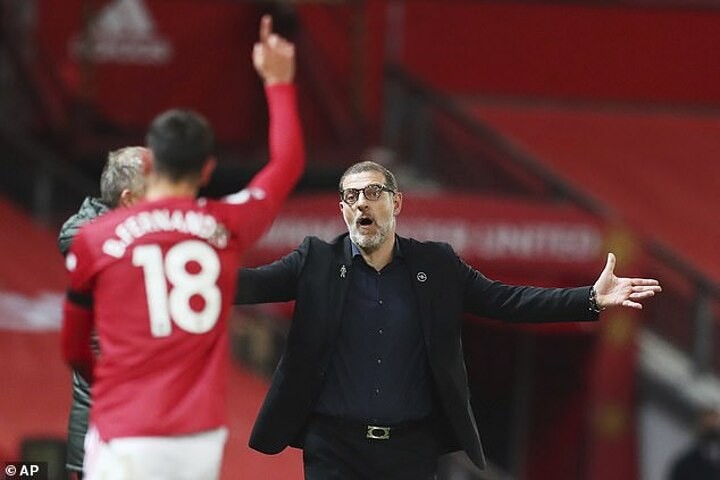 Slaven Bilic saw his side suffer a double penalty frustration at Old Trafford as Manchester United recorded their first home league win of the campaign thanks to a Bruno Fernandes spot kick.

Albion, searching for their first victory since promotion last summer, were awarded a penalty of their own soon after the restart after Fernandes appeared to trip Conor Gallagher.

But, after awarding it, referee David Coote overturned himself after re-viewing the incident on the pitch side monitor.

To compound the injustice - in West Brom eyes - Coote soon handed United the deciding penalty after a handball by Darnell Furlong although replays suggested Bilic was correct in claiming that Gallagher had been fouled by Fred in the build-up to Juan Mata's cross.

The fact that keeper Sam Johnstone saved Fernandes's first kick, only for Coote to order it re-taken as he had moved off his line, just added to Bilic's anger.

'But instead of being, hopefully, 1-0 up, the penalty's not given and, it's not even 0-0, we're one down. That basically kills you in any game, even in the Championship it's hard to come back from that, let alone at Man United.

'Nothing personal but I'm extremely disappointed in the VAR. I felt it was little West Brom and the big decisions went against us.

'It was a penalty on Conor Gallagher and I was very disappointed he over-turned that and then it was a foul on us before their penalty.'

United manager Ole Gunnar Solskjaer initially agreed that his side had been fortunate to escape the decision against them, that came just 50 seconds in the second half.

But, after reflection, Solskjaer credited Coote with getting his major decisions correct - although he was less kind about the display of his team as they recorded their first home league win since the start of July.

'We're delighted with the win,' said Solskjaer. 'They were very tight calls and I think he probably got the two decisions right with the penalties - well, three right because Sam was off his line.

'But this is definitely not a step forward, performance-wise. We played really well against Everton last time but this one was way below par.

'But we got the first win and sometimes three points is more important than the performance. Even though we need to get the points and move up the table we have to play better.

'We know we can play better than this. We certainly could have made it more comfortable had we taken our chances earlier on.

'Towards the end, when you don't do that, there is always an edge to the game and we did seem edgy towards the end. It was important to get that win of course and you could see that - we never got the composure or quality to get that second goal.'