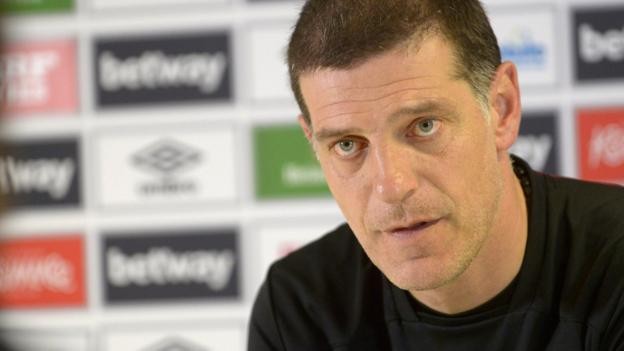 Slaven Bilic was sacked by West Ham in November 2017

West Bromwich Albion have spoken to former Croatia and West Ham boss Slaven Bilic as their search for a new head coach continues.

Fans have been critical of the club over the time it has taken to replace Darren Moore, who was sacked on 9 March. But Albion feel they should examine every realistic option.

But West Brom are attracted to Bilic largely because of his two-year spell in charge of West Ham, although he was sacked in November 2017.

Before that, he spent six years leading the Croatia national side from 2006.

Sheffield United's Chris Wilder remains on West Brom's radar after the club's hierarchy - led by chief executive Mark Jenkins and technical director Luke Dowling - were made aware of discontent behind the scenes at Bramall Lane.

The Blades are currently embroiled in a court case between co-owners Kevin McCabe and Prince Abdullah Bin Mosaad Bin Abdulaziz Al Saud, which might make Wilder open to a move.

While this is unlikely to materialise into an appointment, given Wilder is a Blades fan and was named LMA manager of the year after taking the club back into the top flight after a 12-year absence, West Brom feel they should at least establish whether he is an option.

They have already ruled out Lincoln City boss Danny Cowley, another candidate who came onto their radar, while Jimmy Shan, who led the club into the Championship play-offs, will not get the job full-time.