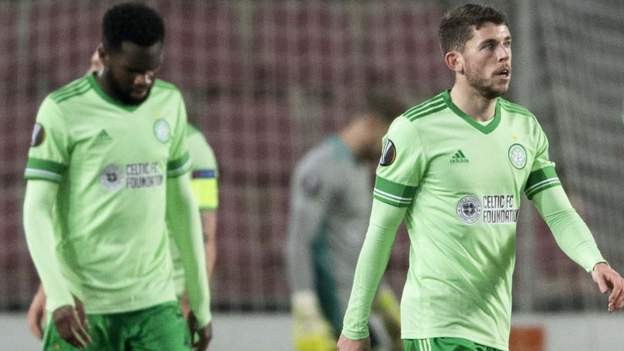 Celtic are out of the Europa League with two games to spare after a second successive 4-1 defeat by Sparta Prague heaped more pressure on Neil Lennon.

Odsonne Edouard marked his return to the XI with a stylish opener, but David Hancko exposed poor defending to level.

Celtic have now taken one point from their four group games after a fourth loss in nine games in all competitions.

Lennon's side - who have won just twice in those nine matches - can now only reach a tally of seven points; a mark which is guaranteed to be beaten by at least two of Lille, AC Milan or Sparta.

Trailing Rangers by 11 points in the Scottish Premiership - albeit with two games in hand - Celtic needed to get back to winning ways to get into some sort of contention in Group H.

The early omens were not good as David Moberg Karlsson flashed wide with a long-range shot that looked like it had the beating of goalkeeper Scott Bain.

Things started looking up for Celtic when Edouard received Callum McGregor's pass, slalomed one way then the other as he advanced towards goal then converted past Florin Nita.

But the Czech side soon levelled from a corner. Scott Brown did not clear his lines, allowing David Pavelka to get away a mis-hit shot, and Hancko buried the ball as he and two others were being played onside by McGregor.

And the Prague side moved into the lead when Borek Dockal's low cross from the right eliminated all four Celtic defenders and Julis forced in at the back post, though the striker did appear to be offside.

Sparta could, and probably should, have added to their lead when Dockal's free-kick was headed on to a post by Ladislav Krejci just before the interval.

An Edouard free-kick early in the second period was touched wide by Nita and Ryan Christie then curled an effort wide for Celtic.

Edouard should have levelled when found by Olivier Ntcham but his tame shot was collected by the keeper.

Tom Rogic, so often a scorer of vital Celtic goals, was sent on in place of Brown for the final 24 minutes but the Australian could not spark a revival, with Julis soon putting the game to bed.

Hatem Elhamed's defensive header was poor and he then missed an interception as Karlsson sped away on the left to cross for Julis to volley past Bain.

And Celtic were found wanting at the back again as Plavsic raced on to another Dockal pass, rounded Bain and finished past McGregor on the goal line.

Man of the match - Lukas JulisJulis (right) was Celtic's tormentor in chief once again after his hat-trick in GlasgowWhat did we learn?

Celtic restored Elhamed and Christopher Jullien to the right side of their much maligned defence to compliment Kristoffer Ajer and Diego Laxalt.

And the new back four struggled from open play and at set pieces, Sparta taking advantage as they had done when they won 4-1 in Glasgow.

In James Forrest's continued absence, the Celtic attack lacks pace and a goal threat from the right.

Positively for the Scottish champions, Edouard looked much more like the striker that started the season with a hat-trick against Hamilton back in August.

Celtic begin their defence of the Scottish League Cup at home to Ross County on Sunday (14:00 GMT) and take on Milan in Italy in the penultimate round of Europa League group fixtures next Thursday (20:00).

Ryan Christie (Celtic) wins a free kick in the defensive half.

Filip Soucek (Sparta Prague) is shown the yellow card for a bad foul.

Olivier Ntcham (Celtic) wins a free kick in the defensive half.

Hatem Elhamed (Celtic) wins a free kick in the defensive half.

Borek Dockal (Sparta Prague) wins a free kick in the defensive half.