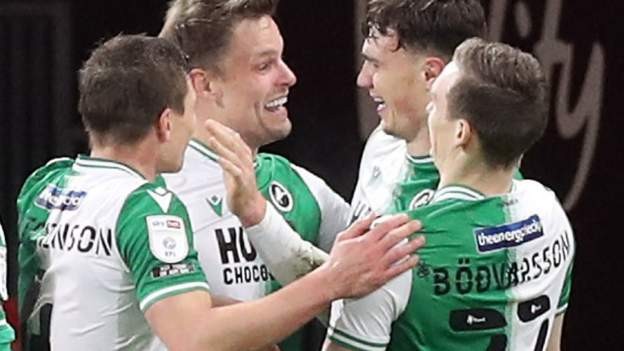 Substitute Matt Smith scored with his first touch to give strugglers Millwall a well-deserved draw at Bournemouth.

Only a minute after coming on, the striker got on the end of a Jake Cooper flick to poke the ball past Asmir Begovic and earn Millwall a point.

Dominic Solanke's 10th Championship goal of the season had put the Cherries ahead, a powerful strike from a tricky angle that beat Lions keeper Bartosz Bialkowski at his near post.

Jason Tindall's hosts missed the chance to move up to second and are five points behind leaders Norwich, while the point was Millwall's 11th draw of the season and leaves them with only one win from their past 14 league matches.

An early David Brooks shot - after a dribble into the box - was well saved by Bialkowski as the Cherries started brightly, but his opposite number Begovic twice denied Millwall midfielder Jed Wallace, from a one-on-one and then a free-kick.

Solanke's opener on the stroke of half-time came after a wonderful turn, run and pass from Junior Stanislas, with the former Liverpool striker's stinging shot too hot to handle.

Bournemouth were set for a third home league game without conceding for the first time since October 2014 but allowed the second half to drift, and when on-loan West Brom striker Zohore sent his 20-yard free-kick under the wall and against the foot of the post the visitors could sense their chance.

Smith was sent on as part of a triple change by Millwall boss Gary Rowett and from a long free-kick inside the Lions' own half the former QPR striker showed good movement to provide the finish from his team-mate's header.

"Unfortunately for us they ended up scoring from a set play which was disappointing in the sense of how we defended it and ultimately that's cost us the two points.

"They look to frustrate, get people behind the ball and then they look to wait for a mistake and hit you on the counter attack or score from a set play.

"But you still have to defend the situation better and that was the disappointing thing.

"Once we got ourselves in front I thought we'd be OK and create another moment that would hopefully put the game to bed, but we didn't."

Jón Dadi Bödvarsson (Millwall) wins a free kick in the defensive half.

Attempt missed. Joshua King (Bournemouth) right footed shot from outside the box is close, but misses to the right. Assisted by Dominic Solanke.

Attempt saved. Matt Smith (Millwall) header from the centre of the box is saved in the top right corner. Assisted by Ben Thompson with a cross.

Jefferson Lerma (Bournemouth) is shown the yellow card for a bad foul.

Ryan Leonard (Millwall) wins a free kick in the defensive half.

Lewis Cook (Bournemouth) wins a free kick in the defensive half.

Goal! Bournemouth 1, Millwall 1. Matt Smith (Millwall) left footed shot from the centre of the box to the bottom left corner. Assisted by Jake Cooper with a headed pass following a set piece situation.

Ryan Woods (Millwall) wins a free kick in the defensive half.