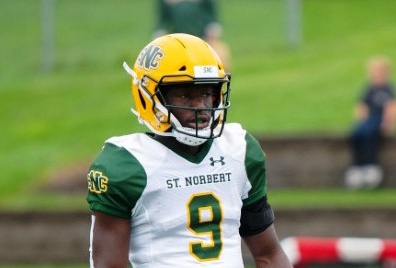 St. Norbert College defensive back Bright Boachie is from Ghana, Africa, but moved to the United States when he was 9 years old. Tyler Luedtke Photo

Growing up in the Republic of Ghana, Africa, soccer occupied most of Bright Boachie’s time. He played on the streets and in fields against competitors – most of whom were older.

Boachie would also take part in tournaments through his school. “When I was there, I didn’t experience any other sports – that’s all I knew,” Boachie said.

His extensive background in soccer has also helped him excel in football. Eleven years after moving to the United States, he is making a name for himself on the St. Norbert College football team as a defensive back.

St. Norbert football head coach Dan McCarty loves having Boachie on the team. “He’s one of the players I’m closer to because he pops into my office all the time,” McCarty said.

''He probably gets annoyed by me, but I love pulling up Google Maps of Africa and asking him questions about life back there.''

When Boachie moved to Chicago a month shy of his 10th birthday in September 2008, he kept playing soccer. It wasn’t until his freshman year at Lane Tech College Prep when a friend suggested he try out for the football team. He didn’t know the first thing about the sport. “I started liking it,” Boachie said.

''It was fun. The whole idea of running down and hitting people – I enjoyed that.''

In his first year, he played on the freshman team. As a sophomore, Boachie was the starting fullback in a triple-option formation on the varsity squad. During that second season, he also played cornerback and switched to safety as a senior.

In his final year, Boachie moved to wide receiver. A few college programs contacted him to play at the next level, including St. Norbert.

''I didn’t think I would be playing college football,'' said Boachie, who graduated from Lane Tech in 2016.

''I didn’t put much into it and didn’t attend any camps. After my junior year, I had a couple of coaches start calling and emailing me. I figured I must be pretty good. I wasn’t looking at going Division I – I simply wanted to play.''

Coming to St. Norbert in the fall of 2016, Boachie was a wide receiver. He received sporadic playing time in his first two seasons, catching 10 balls for 91 yards. After dropping some passes, the Green Knights’ coaching staff suggested Boachie move to defensive back after his sophomore season – he obliged.

''We thought it would be better to get him on the defensive side of the field,'' McCarty said. ''Ironically, this year in training camp, there were some days he was averaging a pick a day.”

The transition to safety wasn’t always the smoothest, but since Boachie was familiar with how a wide receiver plays the game, he could channel his offensive knowledge.

''Playing receiver before, I tend to use that to my advantage,'' Boachie said. ''If he’s inside the numbers, he might be out – those things usually help.''

As a junior last season, Boachie started on all four phases of special teams.

''The coaches said they had to find a way to get me on the field – anyway I could help the team,” Boachie said. “I was excited about the opportunity.”

Boachie finished his junior year with 10 tackles and a fumble recovery in the end zone for his first and only career touchdown. With his senior season upon him, Boachie earned a starting position at safety and has excelled in the first few games of the year. “I’m doing pretty well so far,” Boachie said.

''I’m still getting used to the safety position because it’s the first time I’ve played the position in college. You’re the last man in the back, and you’ve got to keep everybody in check and make sure everybody is in the right position. I’m making progress.”

Boachie – who enjoys watching and picking up pointers from Detroit Lions cornerback Darius Slay – has 10 tackles, one sack, two quarterback hurries, two pass breakups and a forced fumble to his credit this season.

According to McCarty, one of Boachie’s best attributes is understanding St. Norbert’s defensive scheme.

''We put a lot on our safeties to make the calls and make the checks,” McCarty said. ''His feet are tremendous, and I’ll attribute that to his background of soccer growing up. He’s physical when he needs to be. He’s not afraid, even with a little dinged up shoulder over the years. He will stick his nose in there and lay some licks when he needs to.”

Boachie said he enjoys the physicality of the sport. It’s certainly much more aggressive than during his soccer days in Ghana.

When Boachie first moved to De Pere for college, he’d travel to Chicago plenty of weekends to compete in a league, but he eventually began concentrating solely on football.

''I don’t regret the decision I made,” Boachie said. “I’ve made a lot of memories and met a lot of great people playing football.''