"People were scattered all around the stadium,â€ demonstrator Alistair Mackay told MambaOnline. â€œWe saw rainbow flags and even a rainbow umbrellaâ€¦. While there werenâ€™t enough of us to make a big impact in the stadium, we got into the news, which was perfect and what we wanted."

Photos of the demonstration even made the front page of South African daily newspaper Die Burger, with a headline which Mamba translated to read "Gay Laws Under Fire at Soccer in the Cape."

The activists, who organized and posted photos on social media, were protesting Nigeria's recent criminalization of homosexuality, which imposes 14-year prison sentences on anyone who marries a person of the same gender, and outlaws public or private gatherings of LGBT people making declarations of same-sex relationships. Nigerian president Goodluck Jonathan signed the law on January 7, and at least 38 people have already been arrested â€” and some reportedly tortured â€” for being gay. 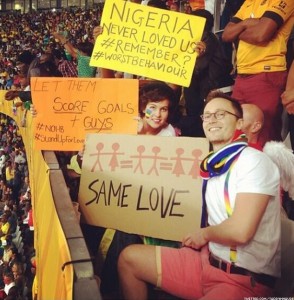 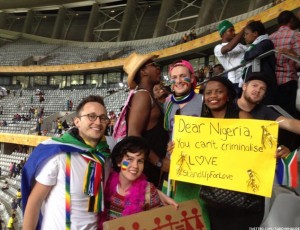