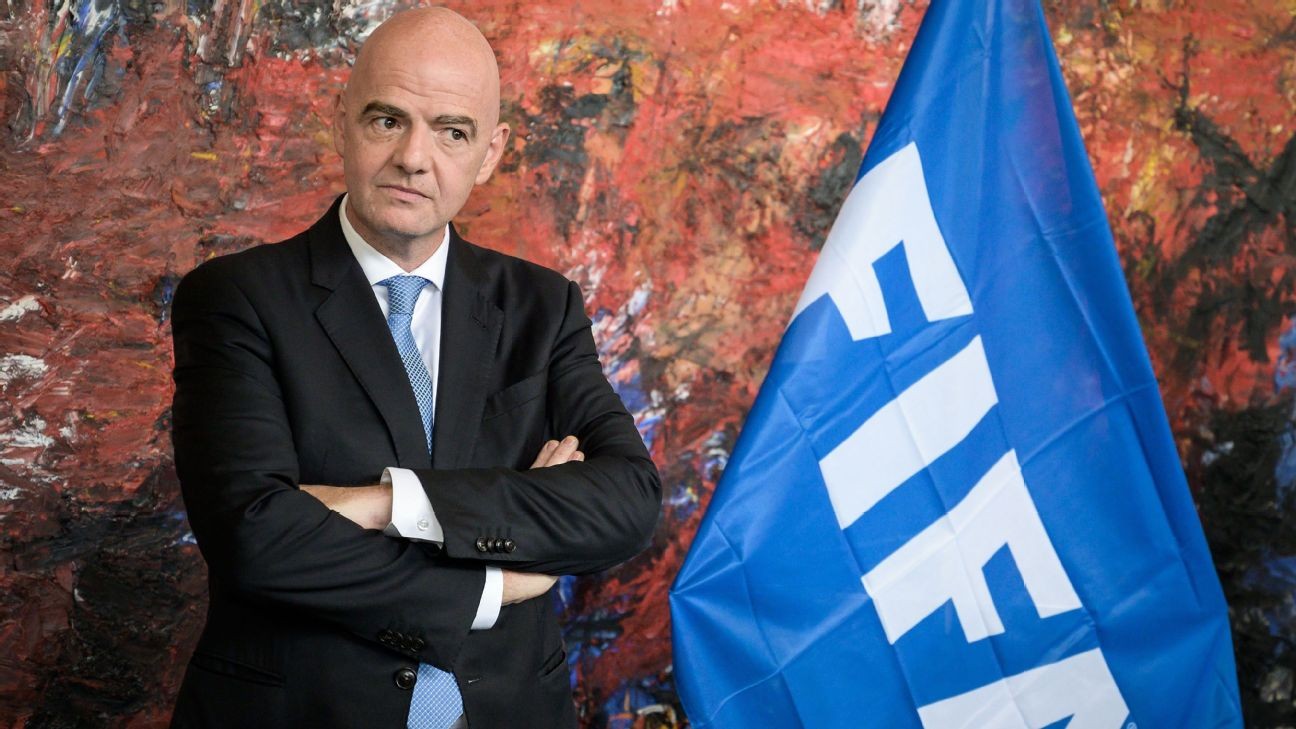 Think of it as football's Y2K, the legal bug in the system that could -- if unaddressed -- unleash havoc if 2019-20 competitions continue past June 30.

More than one out of five players in Europe's Big Five leagues -- English Premier League, Spanish La Liga, Italian Serie A, German Bundesliga, French Ligue 1 -- would, legally, disappear from club rosters come July 1 when their contracts expire or when their loan deals come to an end. FIFA have assembled a working group to deal with the issue and a proposal, seen by ESPN, outlines some potential solutions. And when UEFA videoconferences with member associations and other stakeholders on Wednesday, it will be on the agenda.

If a solution isn't found, it's hard to see how competitions can continue into July, something that may be necessary if the coronavirus pandemic doesn't abate in many nations. On the other hand, the proposed fixes in the FIFA document open up a pandora's box of other issues that could tie everything up in legal red tape.

Q: OK, let's start at the beginning. Who is affected and why?

A: Based on available contract information, it's at least 500 players from the five leagues mentioned above. That's more than one-fifth of the ones who have played this season. Some clubs have as many as 17 players in those circumstances: they would physically struggle to put out a team without them.

Some 270 of those players are on contracts that expire on June 30, 2020, while the rest are on loan from other team and those agreements also end on June 30, which means their registration goes back to their parent clubs.

- Ogden: Records that would be lost if season is voided
- Thompson: A letter from coronavirus quarantine
- Miller: What we miss about the Premier League
- Stream FC TV on ESPN+ Monday through Friday

A: Because that's the standard date on which contracts end in most leagues. And it makes sense because the FIFA transfer window opens the following day, on July 1.

Q: Which leagues are most affected?

A: La Liga would lose 24.6 percent of their players, Serie A 26 percent. In the Premier League it's less, 12.9 percent of players are affected, but it hits certain teams far more than others: Newcastle would lose nine players, for example. Leganes, 14. SPAL a whopping 17 and Union Berlin 12.

FIFA president Gianni Infantino has a proposal to offset some of the major issues around ending the 2019-20 season past June 30, the typical end date for player contracts or loan deals. But will any of them work?

Q: OK, so how are FIFA going to address this?

A: Well, the proposal in the working paper seen by ESPN lays out some guiding principles for countries to follow. It's the typical situation where you don't need to follow them, but if you don't you risk being out of step with the rest of the world and hurting your club. They're also generally common sense.

The single biggest proposed change is that all contracts set to expire on June 30 would instead expire on the final day of the 2019-20 season, whenever that day is in an individual country. For some leagues, pandemic permitting, that may mean July. For others, it could be as late as August or September. Obviously, national leagues will decide those dates in accordance with their government and health authorities.

Q: Can you legally just extend contracts like that?

A: The legal argument is that June 30 is an arbitrary date that conveniently falls after most leagues have finished and that contracts are really designed to end once the season ends. So if you shift the end of the season, presto! You've extended the contract. Obviously this applies in "force majeure" situations and a global health crisis is clearly one of them.

A: Nope. Imagine you're a player whose contract ends on June 30 and has already signed with another club for next season, as you're legally allowed to do.

Take Ajax's Hakim Ziyech, for example. He signed a contract to become a Chelsea player on July 1. Now, that date could be much later, which presumably would cost him money (since he got a raise from his Ajax deal when he signed for Chelsea) and also expose him to the risk of injury if he continues to play for Ajax. Or imagine you're a club saddled with a bunch of players you don't rate who were set to leave on June 30. Now, you're stuck with them for several more months, and you may struggle to pay their wages because you had budgeted for them to leave.

There's also a broader issue with regards to national employment law. It was all nice and neat when contracts ended in the off-season; now it's anyone's guess. Different countries will have different legislation and employers may simply not have the power to extend contracts unilaterally.

Hakim Ziyech is supposed to join Chelsea on July 1 but if the season continues past that point, would he be stuck at Ajax? He's not the only one who would be impacted by a judgment like this.

Q: It sounds like a major can of worms...

A: It is, and there are other issues which are less sexy but no less important.

Many transfer fees and sponsorship payments are paid in installments. Do you extend those contracts too? Some clubs would no doubt benefit, for others it would be disastrous.

The other major disruption is going to be in relation to the transfer window. Remember that FIFA sets the general window and national associations set their registration window within that. What happens if the Bundesliga wraps things up by June 30 and plans for a mid-August restart, but the Premier League doesn't end until late August? Where do you put the window?

The overlap in league seasons becomes a real issue unless you allow, given that we're in exceptional circumstances, for the window to be open for a good chunk of the season, like in the old days. That of course presents its own problems, with players coming and going and negotiating with direct rivals in midseason.

There's another serious issue, too...

A: The transfer window isn't just a chance for players to move and teams to strengthen or cash in. For many clubs, it's essential to balancing the books year after year. If you look at profits from "player trading" as a share of club revenues, it has become increasingly important across the board at clubs big and small. At some clubs, it dwarfs gate receipts.

Why? Because it's not a zero-sum game. Amortization allows you to spread the cost of buying a player over the life of his contract, but if you sell a player, you get to book the revenue straight away. If the window is significantly reduced or altered, that will be very difficult to do.

Q: OK, so what's the solution here? What's FIFA meant to do?

A: I don't know. It's obviously a "least-worst" scenario. The tidiest answer would be if every league that plays a fall-spring schedule simply agreed to end 2019-20 on June 30. If you have time to play some games to settle outstanding issues, then do it. If you want to void the season, do it. If you want to take the table as final for promotion/relegation issues, do it. If you have to increase the size of the top flight, do it. Do whatever you like, but draw a line under June 30 and start next season whenever it's safe to do so.

Except that likely won't happen. There's too much money at stake in TV, gate receipts and sponsorship income that clubs fear losing out. There's also the integrity of competition; you don't want to end up with an unfair "solution" that brings lawsuits and unhappiness. So the next best thing is something like the FIFA document, but it only really becomes effective if everyone agrees to adopt it and, to some degree, we reach some agreement on league start dates and the transfer window across the board.

Interests vary across the world as do conditions. Leagues will look after their own backyards, to some degree, but a common global agreement would at least minimize the disruption. It would also allow us to move on when this pandemic is over.