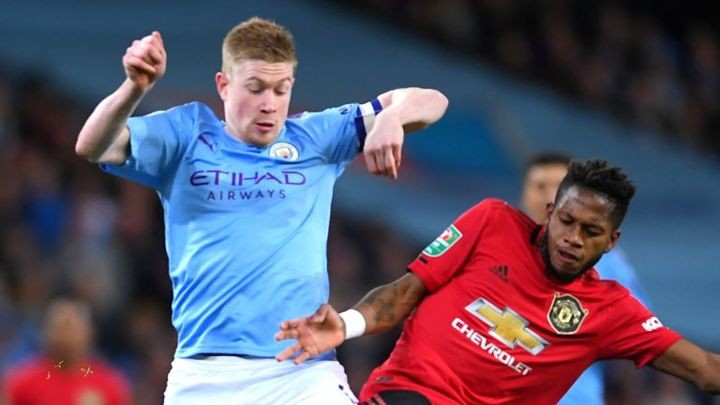 In his latest column, Sky Sports News reporter Kaveh Solhekol looks at whether a salary cap would be a realistic proposal for Premier League clubs, examines how suited Donny van de Beek would be to English football and highlights how keen clubs are to show support for the NHS.

Is a salary cap a realistic proposal?

Paul McGrath was 22 when he was invited to Manchester United for a trial. He had survived a troubled upbringing to make it as far as playing professional football for St Patrick's Athletic in Ireland.

It was 1982 and Manchester City, Watford and Luton Town had made offers for him but he had his heart set on United.

After a month in Manchester, he was invited into the manager's office and Ron Atkinson made him a take-it-or-leave-it offer of £101 a week.

That was less than McGrath was making playing football in Dublin and not much more than he had been making as an overnight security guard and an apprentice roofer before that.

McGrath hesitated. He wanted a little bit more but Atkinson told him to pack his bags and go back to Ireland if he didn't like the offer.

McGrath signed on the dotted line and went on to become United's most naturally gifted defender of the modern era.

"I was 22 and being offered the chance of a career with Manchester United," McGrath wrote in his autobiography. "To walk out of that room without signing would have been like leaving the lottery office without the cheque."

That exchange always comes to mind whenever anyone raises the prospect of a salary cap in modern football. Why don't we have one? Wouldn't it make everything fairer? Well, in reality, it is a lot more complicated than it sounds and brings into play a whole new set of problems.

Plenty of owners and chief executives would love to have a salary cap but it is never going to happen - even though clubs are taking a financial hit at the moment because of the coronavirus lockdown.

One Premier League club owner admitted a salary cap would be a great idea but he was realistic enough to accept that no matter how bad things get, it is unlikely to ever happen.

"We can't have one because it would mean our league wouldn't be able to compete with the other top leagues in Europe to sign the best players," he said. "We would cease to be the Premier League, the best league. A salary cap could only ever happen if all European leagues bought into it as well."

You could make a compelling case for introducing a salary cap, especially considering the financial strain clubs are going to be operating under in the short and medium term, but as one senior club figure said: "It would help a lot of clubs but being realistic it will not happen in my lifetime."

Earlier this month, the Premier League told MPs its clubs will lose more than £1bn if this season is not completed. Even if the season is finished - most likely behind closed doors - clubs will still lose money from lost matchday and commercial income.

Talks are continuing about wage cuts and deferrals for players. Southampton and West Ham have already agreed deals with their players and more clubs are likely to announce similar agreements in the next few days.

The cap is difficult to police effectively though. In December last year, Premiership Rugby announced a comprehensive review of their salary cap regulations after Saracens were docked 35 points and fined £5m for breaking the rules over three seasons.

What is clear is that a salary cap would only ever be introduced in English football as part of a Europe-wide initiative. That would need the agreement of the so-called Big Five European leagues and their clubs, as well as bodies such as European Leagues, the European Club Association and FIFPro.

It is almost certain that this season will be finished at some point this year, but what will games look like when football returns?

Well, they seem likely to be played behind closed doors in the summer.

It will be strange but it will also be cause for quiet optimism, a realisation that things are slowly starting to get back to some kind of normality.

One idea clubs initially seem amenable to would be teams showing their support for the National Health Service by wearing the NHS logo on their shirts when football comes back.

I know that West Ham, to name just one, will definitely do it if asked.

If we have a transfer window this year, it would be great to see Donny van de Beek playing in the Premier League next season.

His Ajax contract runs out in two years and they are prepared to sell this summer.

Van de Beek is a 22-year-old box-to-box midfielder who is perfectly suited to English football. He can also sit deep and he showcased his talents when he played in England in the Champions League against Chelsea and Tottenham in the past 12 months.

Real Madrid are the favourites to sign him but his agent has admitted that more than one club is trying to sign him.

Manchester United have been long-term admirers. Seeing him play alongside Bruno Fernandes would be a dream come true for United fans.