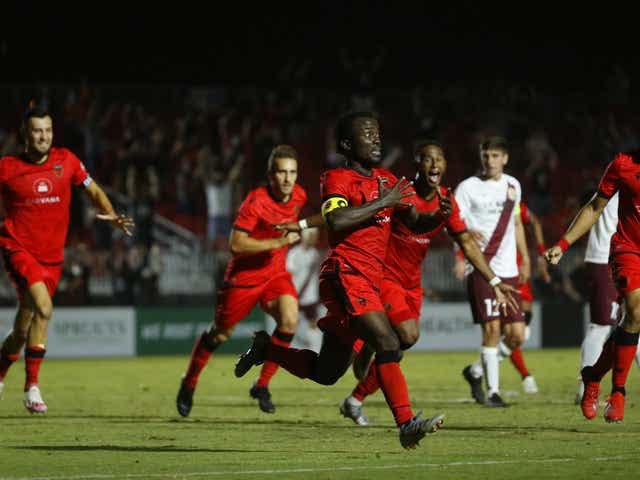 It was going to be a unique challenge for Rising compared to SD Loyal, which they beat 4-1 in their season opener.

It was Oakland Roots' first ever competitive game in the United Soccer League after two years in the National Independent Soccer Association.

Also, they underwent a managerial change late in offseason/preseason having mutually parted ways with Dario Part on April 25 and placed Jordan Farrell as their interim manager.

The star of the game was Asante, who in back to back seasons has won USL MVP, as his two goals were the difference in the game.

His first goal came in the 10th minute when a turnover in the final third of pitch gave Dadashov a clear shot on goal that was saved, but Asante was there to finish the rebound.

It marks the third rebound goal of the season for Rising who are positioning themselves well for those second chances.

Asante added to his tally in the 69th minute where Roots goalkeeper Zeus De La Paz tried a short pass to his defender but was cut off by Asante who slotted in the easy one on one chance.

It was not the first goal of the second half as Rising doubled their lead after a beautiful long ball from the defensive half by James Musa got to Moar who beat two defenders to it and finished it between the keeper's feet in the 48th minute.

It marks the second time that Rising has opened the season with back to back wins.

The last time they did that was last year when they made the USL Championship, and they will hope for similar result this year.