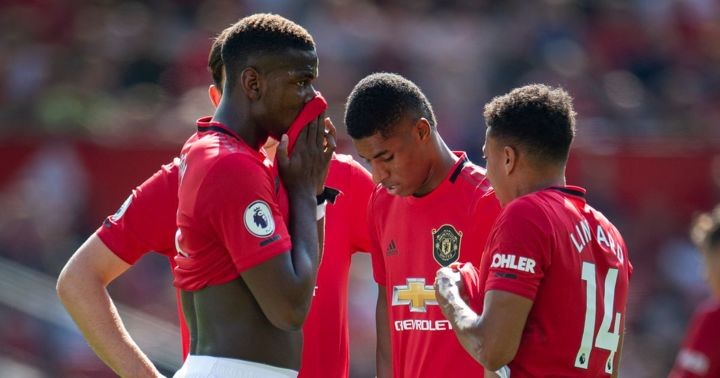 It wasn't long ago that Paul Pogba and Jesse Lingard felt like the epicentre of the Manchester United side.

The notion that the pair, key academy graduates of recent years, could leave the club while Ole Gunnar Solskjaer was in charge seemed crazy.

They had built up a fair amount of credit in the eyes of the club having been key pillars of the 2011 Under-18s side that won the FA Youth Cup, the last United team to do so. Both had also played under Solskjaer for the club's reserves (now Under-23s) and seemed to be instantly fired up by the Norwegian's appointment in December 2018.

Both were instrumental in Solskjaer's first game in charge, that 5-1 win over Cardiff City in which Pogba got two assists and Lingard two goals. And they remained excellent throughout the now famous surge of form that followed Jose Mourinho's departure, featuring in subsequent league victories over Huddersfield, Bournemouth, Newcastle, Tottenham, Brighton and Leicester under Solskjaer.

Perhaps the most enduring image of that hot streak was the sight of Lingard and Pogba dancing gleefully at the Emirates Stadium during a sensational 3-1 FA Cup win over Arsenal, which was typical of that initial 'Solskjaer surge'. Dab, dab.

The two homegrown United players, four months apart in age and at their peak - around 26 years old - could do no wrong. Their futures at the club were mapped out.

Yet the more recent red-hot spell of United form under Solskjaer has come without them both. Lingard has been a passenger in United's current 11-game unbeaten run, while Pogba hasn't featured at all due to injury.

And with both players contracts expiring in June 2021, Solskjaer is now faced with arguably the toughest double-pronged decision of his United tenure so far.

Plenty of United fans would disagree, mind, and argue that allowing Pogba and Lingard to leave Old Trafford should be a straightforward decision. That is a reactionary and slightly simplistic response, however, and not one that will enter Solskjaer's mind given his loyalty to the two players.

When picking Lingard for a more recent clash at Arsenal on New Year's Day, Solskjaer expressed sympathy for the player's struggles throughout 2019.

"He's had a difficult year last year, we know the reasons behind that. Hopefully he'll have a better 2020.”

But Lingard was ineffectual and United were well beaten. He hasn't started in the league since and his most recent Premier League goal remains the second of those two strikes in Cardiff in December 2018.

Throughout the Pogba transfer saga, during which the Frenchman has been consistently linked with a United exit to either Real Madrid or Juventus, Solskjaer has also refused to criticise his player. He's channelled his anger at agent Mino Raiola who has stoked the fire and now represents both Pogba and Lingard ahead of this decisive summer.

"Well if you can't walk your dog, then something must be wrong," Solskjaer said while defending Pogba from press attention around Christmas.

"Paul is a Man United player and he is a player we are happy to have him in the squad. For me, he is one of the best players in the world, and I have always said it and I think you have seen what he can do on the pitch."

And yet you wonder whether all this is just canny management from Solskjaer, who has never fallen into the Mourinho trap of marginalising his own players. The Norwegian is a diplomat with the media who has learned his trade from Sir Alex Ferguson.

Privately, there is no doubt Solskjaer and the United hierarchy are mulling over their decisions on Pogba and Lingard. Especially amid United interest in Jack Grealish and Jadon Sancho, two younger and arguably better replacements for the two in terms of position.

Factor in Bruno Fernandes and the recent improvements made by Fred and Scott McTominay, and you wonder where the two 27-year-olds fit in these days.

Both are young enough and good enough to salvage their careers, either at United or elsewhere. From the club's perspective, both will have enough value this summer to tempt them to sell.

Have United completely moved from Paul Pogba and Jesse Lingard? And will that Arsenal game forever be remembered as their last great stand?

This quandary looks now to be in the hands of Solskjaer, their old United mentor.