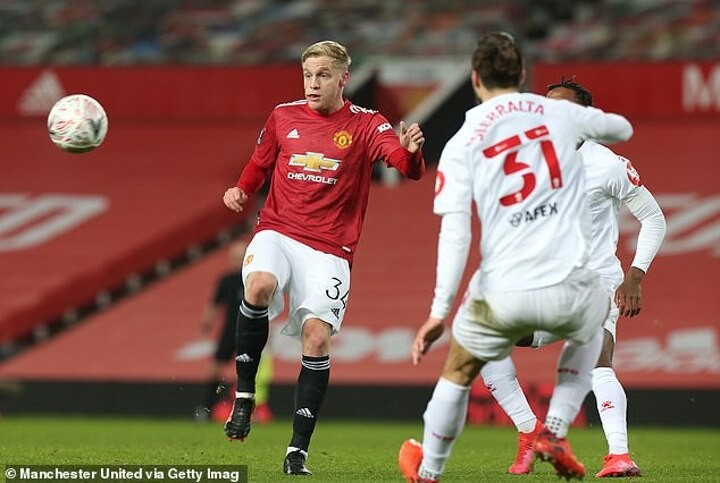 Van de Beek, 23, has started only two Premier League games for United since his highly-publicised move from Ajax but played the full 90 minutes against Watford in the FA Cup and is set to face Liverpool in Sunday's fourth round.

'I wouldn't say that Donny is happy, of course he wants to play more, but he is driven and goes about his job in the right manner,' said Solskjaer.

'He reminds me of when I first came to United. He understands when you've got players doing really well in his position, it's not like we can give him games for the sake of it.

'When Sir Alex left me out, I understood and was happy for the team to win. Donny is that type of guy. He knows he is important for us and is going to play many games.

'He will definitely be involved against Liverpool and might be the deciding factor. He is a quietly confident guy who deep down knows he is good enough and is just waiting for his opportunity.'

But the form of Bruno Fernandes and re-emergence of Paul Pogba in midfield, combined with the defensive assets of Scott McTominay and Fred, have kept him sidelined in United's climb to the top of the Premier League.

They face a Liverpool side rocking from a home defeat against Burnley on Thursday with Solskjaer also deliberating whether to involve £37million teenager Amad Diallo for the first time since his move from Atalanta.

Sunday's clash takes place exactly 22 years after Solskjaer scored an injury-time winner against Liverpool in the fourth round. United had trailed 1-0 until the 88th minute and their comeback set the tone for the rest of the 1998/99 season when they won the Treble.

'It looked like one of those games where you weren't going to score,' recalls Solskjaer. 'I think Keano hit the post a few times, we had some massive chances and then I stole the ball off Scholesy.

'They were my only three touches in the game. I had two to settle and one to put it through Carragher's legs.

'It was an unbelievable feeling you could see that by the celebration. It was the first goal I scored against Liverpool and a big one.'

United are unbeaten in 12 league games and Solskjaer could make changes as they are back in action against Sheffield United in midweek. However, with the trophy cabinet bare since 2017 and the cup representing their best chance of silverware, it remains a very important game, particularly given the opposition.

Solskjaer has match-winners in his dressing-room and is building a core of senior pros like Fernandes, Pogba and Edinson Cavani who can stir their colleagues.

'I had players like Roy Keane, Gary Neville and Ryan Giggs, you couldn't argue with because they didn't just talk the talk - they walked the walk,' said Solskjaer.

'We have players who know what they are talking about. They have been there, know what it takes and demand it off team-mates.

'I talk openly and directly with Paul (Pogba) and he is up front and honest with me too.

Solskjaer will also deliberate on giving a debut at some stage to 18-year-old Diallo. The Ivorian winger is regarded as one of Europe's brightest young talents and arrived at Old Trafford earlier this month.

'He has been training a lot so he might be involved. I've not decided yet,' said Solskjaer. Another United teenager, Anthony Martial, scored on his debut against Liverpool in 2015.