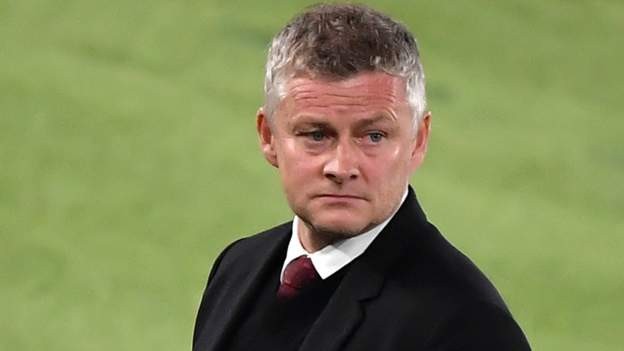 Manchester United manager Ole Gunnar Solskjaer says it is "not my problem" if he distorts the battle for Champions League places by fielding under-strength teams next week.

Solksjaer's side will play three times in five days after their Premier League encounter with Liverpool was rearranged for Thursday, 13 May.

They face Aston Villa on Sunday before hosting Leicester on Tuesday.

Solskjaer says it is "impossible" to pick his strongest squad in every game.

United will face Liverpool - who, in seventh place, are seven points outside of the top four with a game in hand - just 50 hours after they play Leicester.

They only need four points from their last five matches to confirm their Champions League place.

"Someone might not be happy with my team selection for one or two games because it might affect whoever gets into the Champions League," Solskjaer said.

"That's not my problem. That's everyone else's problem.

"I don't know how you can defend playing these three games in such a short space of time."

'Faith in Solskjaer close to being rewarded'

Although he wasn't at United during the season in question, Solskjaer says it evokes memories of the 1991-92 campaign, when Sir Alex Ferguson's side were told they had to play four games in seven days in the penultimate week of the season.

Ferguson subsequently described it as "lunatic congestion" as his team lost games against Nottingham Forest and West Ham in the space of three days to slip from title favourites to runners-up behind Leeds.

"We've been dealt a very bad hand by people who sit behind a desk in their suits who've never played football," he said.

"I've never seen that schedule before in modern-day football. In 1991-92 Man United had a very similar run-in and you can see how the results deteriorate.

"It's too much of an injury risk, so it will be rotation - and a lot of rotation."

Tottenham were presented with a similar schedule during a week in September when they had to squeeze EFL Cup and Europa League games between back-to-back Premier League encounters.

Jose Mourinho called it 'inhuman', although Tottenham did win three of those games, ending in a 6-1 win at Manchester United.

"I'm not sulking but someone doesn't understand the physicality of the Premier League," Solskjaer added.