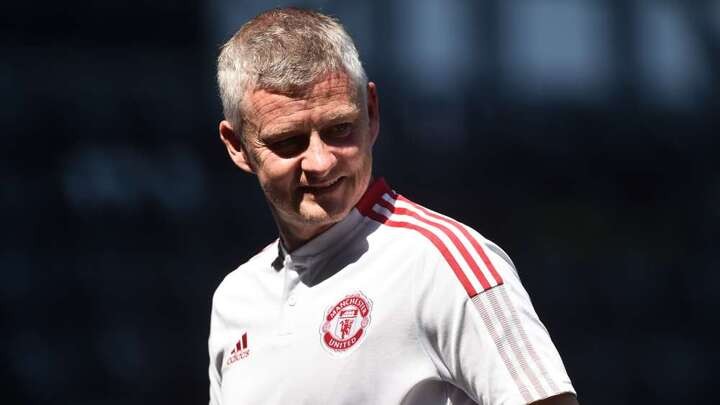 Ole Gunnar Solskjaer said any more signings at Manchester United this summer would be a 'bonus’ having already agreed deals to sign Jadon Sancho and Raphael Varane.

Sancho’s £73 million transfer was confirmed last month while Varane’s move should be completed before the start of the season next weekend once he has completed a medical.

While United still have interest in players in other positions, namely a midfielder and right-back, sources have told Goal the club doesn't expect ‘anything major’ in terms of more incomings before the window closes at the end of the month.

“Anything from now is a bonus,” Solskjaer admitted. “I have to say that with the two signings we’ve got, we’ve strengthened where we wanted to strengthen. Let’s see what happens. You never know in football. Anything can happen, ins and outs.”

What is expected before the window is a number of outgoings. Teenage winger Facundo Pellistri is the latest to agree a deal as he joined Alaves on loan for the season and there should be other departures before the end of the month.

We will have to wait and see whether or not that outgoings list includes Paul Pogba. The midfielder has yet to put pen to paper on a new deal, and with his current deal expiring next summer and interest from Paris Saint-Germain, there has been plenty of speculation about where he will be playing next season.

The France international joined up with his teammates in Scotland for their training camp this week and Solskjaer has been getting positive vibes from the 28-year-old.

The United manager said: “I hope every player thinks this is the place to be to win trophies. When you sign for Manchester United, you have to rise to the challenge. Paul has come back and he’s fresh and he’s always such a positive boy. The talks I’ve had with him have all been positive.”

But, what about Jesse Lingard, Diogo Dalot and Andreas Pereira? All three were on loan last season, and with a bloated first team squad and a need to sell to generate funds for future incomings it is likely they won’t all be at the club come the end of the month.

“We need a big squad,” Solskjaer said. “The start is important, the whole season is important, but you need to arrive in April and May fresh and with enough options. Some might go on loan until Christmas, some might go for a season but I don’t want to be too light in any position.”

That ‘big squad’ includes a congested goalkeeping department where David de Gea and Dean Henderson are set to enter into their second season of battling out to be first choice. Henderson has missed the training camp in Scotland as he recovers from the long-term effects of contracting Covid-19 which means it is likely it will be De Gea who starts the season opener against Leeds.

Gary Neville said earlier this week that Solskjaer needs to make a decision on who will be first choice, but that’s something Solskjaer doesn’t agree with.

“I enjoyed having one first-choice right-back when I played but I never had one,” Solskjaer joked. “It depends on the characters you’ve got and how they gel. It’s healthy competition. If you’re too comfortable, I don’t think you get the best out of yourself.

While the goalkeeper situation will sort itself out over the season Solskjaer’s next task is picking his XI for the season opener against Leeds in a fixture that looks unlikely to feature either of the new signings.

“They still haven’t trained with us and I need to see how they are,” Solskjaer said. “I can’t see them being available for Everton but hopefully they will be ready to be on the bench [against Leeds].”

Whichever XI he settles on, the Norwegian manager is hoping his side get off to a better start to the campaign than last year as they aim to challenge Manchester City for the title.

“You put every season into blocks but the first six or seven games, they’re very important to set the momentum and to give you a chance. I read somewhere that Pep (Guardiola) said you can’t win the league in the first eight games but you can lose the chance to win it and that’s what happened to us last season,” Solskjaer said. “I felt we lost too many points early on. From November 1 until the Leicester game in May, we only lost one league game. That was the consistency we want to see again.”