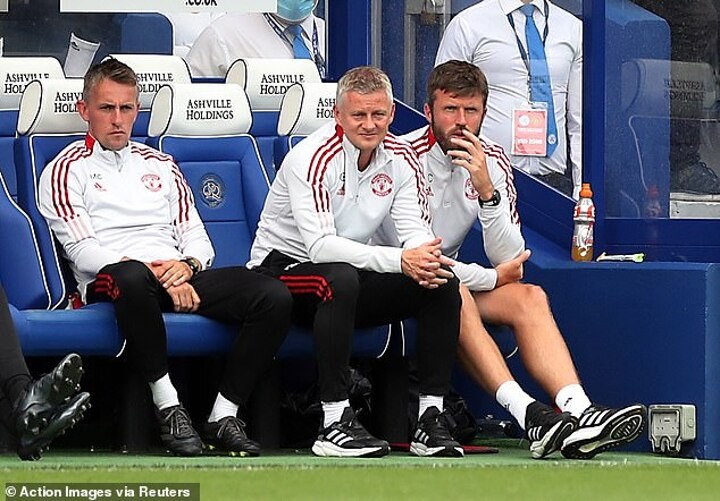 It has been a fairly positive seven days for Ole Gunnar Solskjaer.

After over a year of talks which left Manchester United fans pulling their hair out, the Red Devils finally landed long-term target Jadon Sancho, with the Borussia Dortmund star completing his £73m switch to Old Trafford.

Just 24 hours later, Solskjaer put pen to paper on a new three-year deal at United, with the club's top brass viewing the Norwegian as the man to guide them back to the summit of English football.

However, a poor showing against QPR certainly dampened spirits.

Yes, the team fielded in West London was far from United's strongest, but the Red Devils looked off the pace as their Championship opponents put four past them on Saturday.

This pre-season result has surely already been forgotten by the United masses, but Solskjaer will be fully aware that for all the positivity behind the scenes, it is the results on the pitch that will determine his legacy as United boss.

On paper, Solskjaer's two-and-a-half-year reign has seen United's fortunes take a turn for the better.

The 48-year-old has taken the club from 6th to 2nd in the Premier League, reached four semi finals and the Europa League final in which they lost out on penalties to Villarreal in May - all of which are certainly signs of progression from the chaos left behind by Jose Mourinho.

Yet despite the feel-good spirit at United, news of Solskjaer's new deal has been met with a mixed response, with United fans questioning the reasoning behind the move to reward Solskjaer despite his lack of trophies for the club.

'So Mourinho wins the Europa League, Community Shield and the EFL Cup with an inferior team, and gets canned,' one fan wrote. 'Solskjaer wins nothing, is given amazing new players, still wins nothing and is rewarded with a contract. WTF!'

'I'm an Ole fan but not sure about that just yet...' another United supporter posted.

With the likes of Pep Guardiola, Thomas Tuchel and Jurgen Klopp making their mark, it is widely accepted that the days of complete dominance enjoyed under Sir Alex Ferguson are long gone, but the Red Devils are expected to at least go toe-to-toe with their rivals.

However, from an external point of view, second place appears acceptable at Old Trafford.

'As a United player, when you lose games, look at the last three or four weeks - they've lost games, does it really hurt? It's almost become an accepted thing.

'From Ole's point of view, where's the demands on him? I don't think they'll be saying you have to win a trophy or you're gone. He's made progress, which is progress from the last three or four years, but if you go back further, then clearly not because this club expects to win trophies.

'If it gets into next year, the next couple of years, and it's still nothing, then look, he might have a problem. But for now, I don't think those demands are quite there on him where he has to win. I think there's a lot of players it doesn't really hurt.

'That's why they're in the position. This squad isn't big enough. You look at Manchester City, they've got two teams, two teams that can win a league. I think United have 11 or 12 players capable of winning the league, but they need more than that, you need 17 or 18, especially in this day and age.'

The club's failure to first land Bruno Fernandes in the summer of 2019, then Sancho last year, saw United fans vent their fury at chief executive Ed Woodward and the Glazer ownership, rather than the boss, when results went against them.

But now there can be no question of a lack of backing for the Norwegian.

Sancho's arrival gives Solskjaer the right winger he has long desired, while the club have reached an agreement with Real Madrid over a £42m move for Raphael Varane.

Sevilla's Jules Kounde could be another player through the door at Carrington, bolstering United's defence that has been mired by inconsistency under Solskjaer.

United's problems don't just lie in defence and right wing, either. Roy Keane lambasted the club's midfield pairing of Fred and Scott McTominay, claiming that the club will never return to its former glory with the duo at the heart of midfield.

'I just look at the performance of the two midfielders tonight, McTominay, he's a good honest player,' Keane said after United's 4-2 loss to Liverpool.

'They've got Fred – as long as them two are playing in midfield for Manchester United, they will not be winning big trophies.

'I know Ole preserves with Fred but I can't see it. How they think Fred is going to get United back to winning titles I don't know.'

United's top brass are looking to resolve that issue for Solskjaer too, with the club understood to have moved ahead of Arsenal in the race to sign Wolves' Ruben Neves, valued at £35m.

All of which points to what is shaping up to be a now-or-never season for Solskjaer to make his mark and finally get United over the line.

'You can't say that is an achievement,' Solskjaer said of the merits of a second place finish in April.

'Our ambition is a lot more than second place. I said that when I wasn't at the club – you can never be happy with that and we're not. Don't get me wrong, our ambition is to catch the team in front of us.

'At the moment [City] have had a fantastic season, they have had three or four of them, and we know the challenge ahead of us. But we have to take it on. If you don't, then you're in the wrong place because that is what I am going for.

'Players have to really take that on with the sacrifices they have to make and the work they have to do. Blood, sweat and tears have to be put down because this is the best league in the world – and the most difficult.'

The time for talking is done and the excuses must end. Come August 14, with Sancho and Varane in his ranks, Solskjaer and United must have their eyes firmly fixed on top spot. Nothing less will suffice.