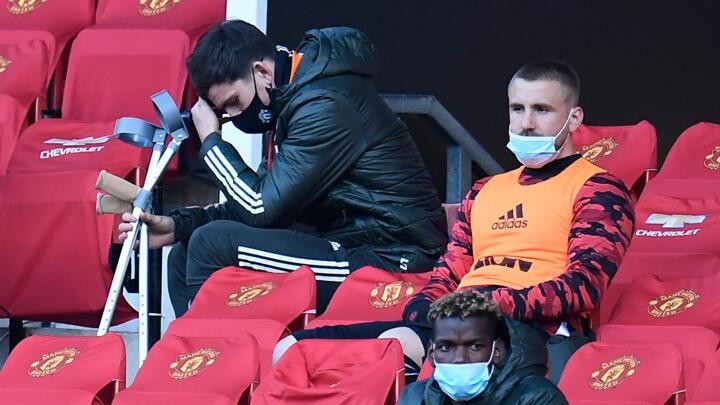 Manchester United boss Ole Gunnar Solskjaer says the club will do all they can to ensure Harry Maguire faces Villarreal.

Ole Gunnar Solskjaer does not expect Harry Maguire to feature in the Premier League again this season but remains hopeful he will be fit for the Europa League final.

The England centre-back was at Old Trafford on crutches wearing a protective boot on his left foot for a 2-1 loss to Leicester City on Tuesday, a defeat that sealed the title for Manchester City.

Solskjaer thinks Maguire's top-flight campaign is over with three games to play, but is optimistic he will face Villarreal in Gdansk on May 26.

The United boss said on the eve of Thursday's Premier League encounter with Liverpool: "The good news was it wasn't broken. There was no fracture, but a ligament injury of course is serious as well.

"If I'm very positive - that's maybe stretching it - I'm hopeful that he might be ready for it [the Europa League final]. I don't think he'll play in the league again before [the end of the season]. We'll do everything we can to get him ready for the final."

Solskjaer needs players to be fit

Solskjaer said there should be no concerns that he might take a risk by playing Maguire with Euro 2020 on the horizon.

"You always try to look after players long-term. If he's fit, he'll play for us, if he's not he won't," said the former Norway striker.

"As I said, we're hopeful that he's ready. If he's ready for us, he'll probably be ready for the Euros. Norway are not in the Euros, so I'm not really that concerned [about the Euros]."

Solskjaer made 10 changes to his starting line-up for the defeat to the Foxes and will rotate again when they face Champions League hopefuls Liverpool, given United are amid a schedule of four games in the space of 10 days.

"There will be changes of course but many of the players that played tonight did really well so they're in contention as well," he added.

"It's about managing the squad now and building momentum, building confidence, making sure we get enough points to get second and then going into the final confident."