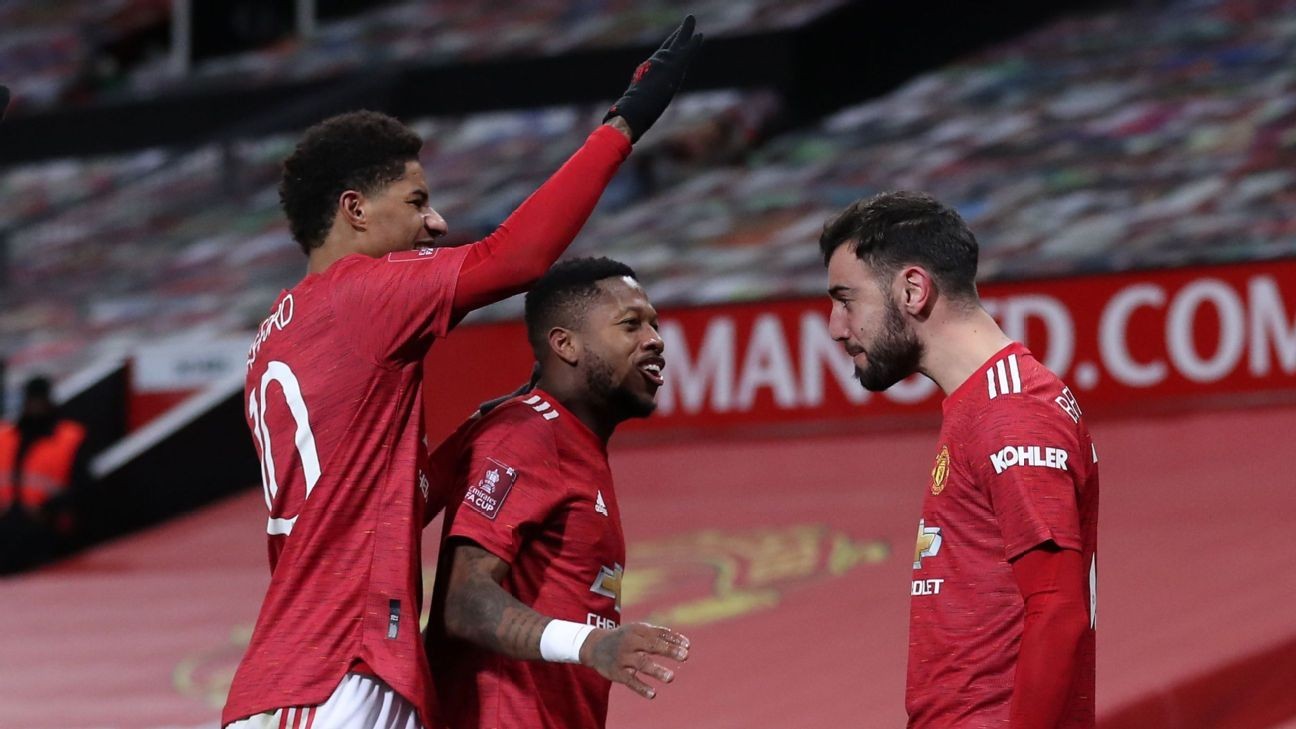 MANCHESTER, England -- In simple terms, Manchester United's 3-2 victory over Liverpool earned the right to play West Ham in the fifth round of the FA Cup, but it could end up meaning much more.

There were no points on offer and no positions at stake, but during a season in which United have positioned themselves in a Premier League title race for the first time since 2013, wins such as this are -- at the very least -- a psychological boost that also maintain valuable momentum.

In 1999, Sir Alex Ferguson's team would not lose again on their way to a Premier League, Champions League and FA Cup treble. This United side would be unlikely to match that kind of run over the next four months even if they were not already out of the European Cup, but Solskjaer believes that certain results can galvanise a group -- even in January -- and this one had that kind of feel.

Behind to Mohamed Salah's 18th-minute goal, Mason Greenwood levelled before half-time and Marcus Rashford put United in front three minutes after the break, only for Salah to make it 2-2 just befote he hour mark.

Liverpool looked more likely to score again and Salah was denied his hat trick by Dean Henderson's save, but Bruno Fernandes followed his introduction from the bench to score with a curling, 20-yard free kick with 12 minutes to go. Salah shot wide with a chance to force extra time and United held on the go through.

For the first time since a March 2020 win over Manchester City, Solskjaer's team have beaten one of England's established "big six," an important hurdle to overcome ahead of the second half of the league season, during which they will play away at City, Tottenham, Chelsea and, next Saturday, Arsenal. Liverpool also visit Old Trafford.

"It's a fantastic to win games over last year's champions, a fantastic team," Solskjaer said. "We played on our terms, found a way the players believe in and we are getting stronger and stronger.

"Look at the difference to six months back," he added. "You can't take too many big strides at once but we are getting better and winning tight games. The morale and confidence is very good."

Jurgen Klopp fielded a strong team, with Salah, Roberto Firmino, Thiago, Fabinho, Trent Alexander-Arnold and Andy Robertson picked from the start, but the Liverpool boss is unlikely to shed too many tears for a competition in which he has only ever reached the fifth round once.

Klopp can be pleased that Liverpool's attacking zip returned against United and Salah got his first goals at Old Trafford, but a bigger worry is the trip to Tottenham on Thursday; Liverpool have not won or scored in the league for a month and that must be remedied quickly if they are to put up a genuine title defence.

"It's not what we wanted so it's frustrating," Klopp said. "We made a lot of steps in the right direction. The start of the game was good, we wanted to change the fortune and we scored twice and that's good as well. That's all ok, but they scored three. We can take positives, I saw a lot of positives, we know what to work on but it's how it is. If you are in a situation you don't like, you take steps to get out of it.

Rashford must learn how to be a striker from clinical CavaniSources: Solskjaer agrees to Lingard loan moveColour-blind fans angered by United-Liverpool kits

Klopp insisted that there is nothing to worry about and that "as a group we are really together and we have to solve it together," and it is true that claiming Premier League and Champions League titles in the last two seasons means he does not need the FA Cup as much as Solskjaer, who is still looking for the first trophy in charge of United.

The only downside for the home team was the sight of Rashford, who was outstanding all evening, walking straight down the tunnel after being substituted; Solskjaer said United's joint-top scorer will have a knee scan on Monday.

Moreover, while pleased with the result, the United manager also took the opportunity to remind his players that the optimism generated by beating Liverpool will mean very little if they cannot do the same against Sheffield United on Wednesday.

"In the dressing room it's a great atmosphere but I want to see a reaction," he said. "Everyone is elated and high and they should be, but tomorrow morning I want to see players thinking about Wednesday, not today."

Solskjaer said in the build-up to this game that, in 1999, it was only after the season ended that he could pick out the important moments that had helped Ferguson's team go on to bigger and better things. Taken in isolation, beating Liverpool in the FA Cup means little more than moving on to the next round, but it could turn out to be far more significant.