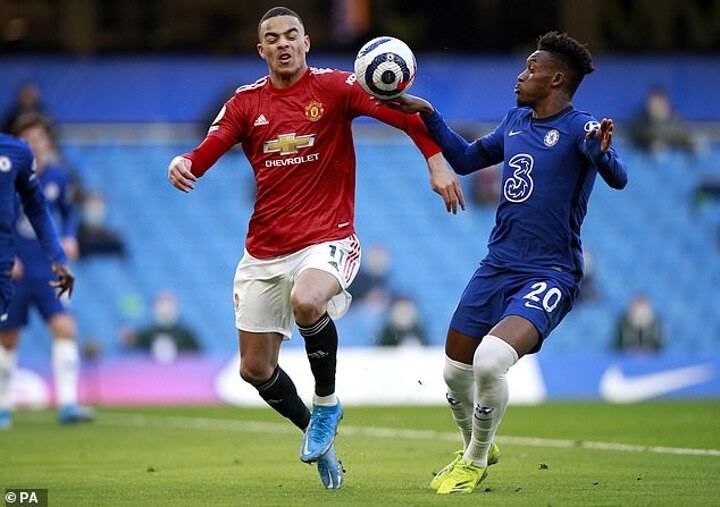 As moans go, blaming your opponents' official website for not getting a penalty must rank among the most bizarre ever uttered by a Premier League manager.

Yet that was exactly what happened on Sunday night when Ole Gunnar Solskjaer, clearly rattled by an article on chelseafc.com, took aim in his post-match interview.

Having seen referee Stuart Attwell deny Manchester United a spot-kick despite Callum Hudson-Odoi appearing to handle the ball and VAR recommending a monitor check, the Norwegian knew exactly who to target.

Asked if he knew why his side hadn't been awarded a spot-kick, a frustrated Solskjaer told Sky Sports: 'It's not right is it. It's all these outside influences. VAR talk before the game on Harry [Maguire], cheeky when they [Chelsea] put that on the website. That's influencing referees.'

Solskjaer was referring to an article on Chelsea's website in which the club said Maguire had 'survived VAR reviews of a potential penalty foul on Cesar Azpilicueta and violent challenge on Michy Batshuayi that may well have affected the outcome' of recent games against the Blues.

But although the article was written with at least a little club bias, Solskjaer's claim that it somehow had an influence on Attwell's decision not to give a penalty seems nothing short of outrageous.

Here, Sportsmail takes a closer look at some of the other complaints the Manchester United manager has made so far this season.

You wouldn't have known United had just beaten Everton 3-1 away from home based on Solskjaer's epic post-match rant back in November.

Having watched his players help keep his job safe just 48 hours after returning from a miserable Champions League defeat by Istanbul Basaksehir, he decided to blast Premier League bosses for their poor scheduling.

Solskjaer branded the decision to give his side a Saturday 12.30pm kick-off after a 4,000-mile round trip a 'joke', claiming they had been 'set up to fail' at Goodison.

'Our boys were set up to fail today with the scheduling,' he raged. 'How can you expect players to perform with the 12.30 kick off time? It's an absolute joke.

'Of course we tried to move this game. What sense was there playing Saturday lunchtime when we could play Sunday because of the international break afterwards.

'I pushed my club to really fight on this one to give us half a chance. But it was just quashed and we were told "No, it's been selected".

'There have been too many serious injuries in the Premier League this season that can be from physical or mental fatigue.

'We want this product to be the best in the world. We don't want it to harm any player. These are difficult times for everyone, not just football, and we need to look after everyone.

'Use common sense, and sort out the schedule. This is such a serious issue, that we don't look after these players. They are not robots, they are human beings.

'We came back from Turkey about four o'clock on Thursday morning and are asked to play 12.30 on Saturday.'

Solskjaer also blamed Luke Shaw going off with a hamstring injury on the early kick-off, adding: 'We have got Luke Shaw injured because we have played loads of games this season already, been to Turkey on Wednesday, got back at 4am on Thursday and we are playing a lunchtime kick-off on Saturday.

'It is an absolute shambles and I cannot praise the boys enough for the character they have shown.'

NO FANS AT OLD TRAFFORD

Seemingly forgetting that every team is in the same boat this season, Solskjaer aired his frustrations over United being unable to have fans at Old Trafford this season.

Trying to explain his side's poor home form earlier in the campaign, the former Molde boss claimed that supporters could have been the difference in games against Big Six rivals Chelsea and Arsenal.

Solskjaer said: 'The two games against Chelsea and Arsenal were very close games. I'm 100 per cent sure that, if we had our fans, that would have helped and maybe sparked us [with] that little X-factor that we needed.

'But it's a different sensation now, playing without the fans behind the goal at the Stretford End. They know how to score a goal for us.

'It's not that easy as: "Why do we not win at home? Why do we not do so well?" Every game lives its own life, I think. There's reasons behind us not having a home win in the league yet so far.

'In Norway, we've got at least 100 fans and they help. Here it's completely sterile and it's different.'

Unlike his attack on Chelsea's website, Solskjaer had a fair point when he highlighted refereeing errors during United's shock home defeat by Sheffield United in January.

The manager was frustrated to see the rock bottom Blades' opening goal stand after David de Gea was pushed by Billy Sharp, while there was also controversy when Anthony Martial's equaliser was ruled out for a similar incident involving Maguire.

And after expressing his disappointment post-match, Solskjaer made the decision to reveal that a report on the game had confirmed both decisions were wrong.

The Norwegian said that he saw the report from the match delegate – who is usually a former player or manager unlike the referee's assessor – and claimed that United should have twice benefited, potentially turning a 2-1 defeat into a 2-1 win.

'The momentum shifted for us with the Sheffield United game,' said Solskjaer.

'I don't like to bring these up but I've got the delegate's report on the referee and the two decisions were wrong.

'You're more likely to, when you go 1-0 up rather than 1-0 down, go on and win that game. So that's fine margins and it has been the way this season.'

Just when you thought the debate over how many penalties Manchester United get had begun to die down, Solskjaer reignited it on Sunday evening.

Having hit out at Chelsea's website for attempting to highlight some of Maguire's shortcomings, the Norwegian also decided to involve Frank Lampard in his post-match moan.

The former England star was sacked by Chelsea over a month ago, but that didn't stop Solskjaer referencing him in his interview with Sky Sports.

'You can read what they're saying about Harry Maguire and putting pressure on referees to give penalties against us, he said.

'We've seen there was a manager, was it Frank [Lampard] that started it? Loads of talk about us getting penalties when there's no doubt, and of course today we should've had a penalty.'

Solskjaer was referring to Lampard's comments in October of last year, when the then Blues boss referenced the amount of penalties United receive.

Lampard said: 'Without a doubt, I'm interested to see what everyone else says. I spoke to the lads about how many penalties they get here, over the last two seasons they're miles ahead in Europe.'

Solskjaer is, of course, still involved in an ongoing war of words with Jurgen Klopp over United's spot-kick record this season.

In early January, the Liverpool boss said: 'I hear now that Man United had more penalties in two years than I had in five and a half years. I've no idea if that's my fault, or how that can happen.'

Solskjaer responded a few days later, claiming comments from Klopp, Lampard and Spurs boss Jose Mourinho could be a way of trying to 'influence referees'.

Despite being given an extra week to get ready for their first game of the season after their exploits in Europe, Solskjaer was still not a happy man.

United began their campaign with a home game against Crystal Palace on September 19, having played their last competitive game against Sevilla in the semi-finals of the Europa League on August 16.

Attempting to explain his side's poor home form, Solskjaer said: 'The first one [against Crystal Palace]... we certainly look at it thinking we didn't have any preparation.'

The ex-Cardiff boss did also concede that Palace 'deserved' their victory, but his comments were the first of many complaints about the scheduling of Premier League games in another Covid-hit season.