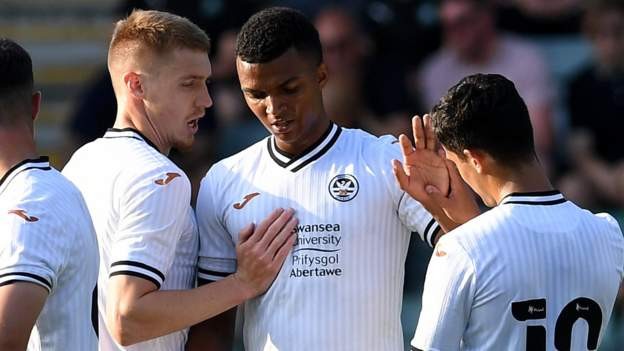 Former midfielder Owain Tudur Jones fears Swansea City are facing a relegation fight in 2021-22 and says "something big needs to change" at his old club.

Swansea are without a manager after John Eustace turned down the chance to replace Steve Cooper.

"Anyone who's ambitious in football might be thinking that Swansea's not the right club to go to at this moment in time.

"I think there's a long season ahead of them and can't see anything apart from a relegation fight, unless they bring in more players.

"Swansea have proved over the past couple of seasons, since they got relegated from the Premier League, that they're a selling club, and the money they've got from selling players like Dan James, Joe Rodon and Oli McBurnie hasn't been reinvested into the squad.

"What we've seen over the years are people like Leon Britton and Alan Curtis, who understand the club, helping to appoint new managers. They don't have that anymore because they've left. Something big needs to change."

Former Chelsea assistant boss Jody Morris is thought to have spoken to Swansea about their managerial vacancy, while MK Dons' Russell Martin and Lincoln's Michael Appleton have also been linked.

The Swans are also believed to have discussed the job with at least one overseas manager.

Cooper led Swansea to the Championship play-offs in each of his two seasons at the helm but there was always a feeling the 41-year-old could walk away after defeat to Brentford at Wembley in May.

Swansea chief executive Julian Winter stated when Cooper left that the decision for him to go had been made a fortnight earlier, which had appeared to give them time to ensure a successor was in place.

The Welsh club expected Queens Park Rangers assistant boss Eustace to take over, but he told Winter over the weekend he did not want the job.

"First of all when a manager leaves a club when he doesn't have another job lined up, that tells me there are big problems behind closed doors," former Wales international Tudur Jones told BBC Radio Cymru.

"As a young manager, he (Cooper) obviously thought it was better for him in the long term to leave the club now with his head held up high. Maybe he can see what's coming next season.

"Secondly John Eustace is an assistant manager who obviously wants to manage and he's rejected the chance to come into Swansea. So there are a couple of examples there why things don't look good at the club.

"With less than two weeks to go until their first game of the season, and with so many loan players having returned to their parent clubs, the problems are mounting."

Having already lost their influential loan signings and talisman Ayew, Swansea are expected to sell captain Matt Grimes during this transfer window, with Fulham keen on the midfielder.

The future of veteran forward Wayne Routledge also remains up in the air.

He has been offered a new deal after his previous contract expired, but is facing a lengthy spell on the sidelines having suffered a ruptured Achilles in May.

Swansea, whose friendly at Bristol Rovers last Saturday was called off due to Covid cases in their first-team bubble, start the new Championship season at Blackburn on 7 August.