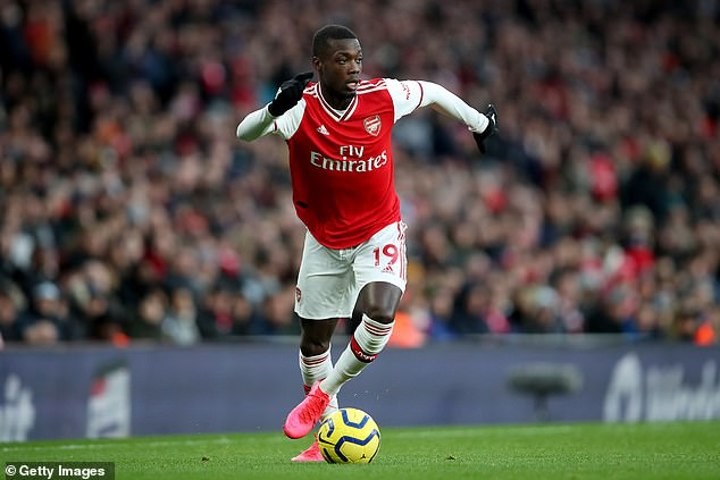 Graeme Souness has heaped praise on Nicolas Pepe after the Arsenal winger put in a dazzling display in the Gunners' 4-0 win over Newcastle on Sunday.

The Ivorian netted once and provide assists for Pierre-Emerick Aubameyang's opener and Alexandre Lacazette's late strike as Mikel Arteta's side ran riot at the Emirates Stadium.

After a slow start to life in north London, Arsenal fans are beginning to see glimpses of the talent the club paid Lille £72million for last summer, and Souness has hailed the winger's performance this weekend.

The Scot drew comparisons between the Pepe and Arsenal legend Thierry Henry, who also failed to hit the ground running before bursting into life further down the line for Arsenal.

'I think there is a real, real player in there,' he said on Sky Sports. 'You think of their best ever player Thierry [Henry], he came here and didn’t have a great first season, took some time, and I see Pepe being a star here, great feet, electric and still a baby.'

'A good finish, not the easiest of finishes, he got in a really good position but he has to have that level of control on the finish which is good,' he said.

Henry enjoyed an incredible eight-year spell at Arsenal under former boss Arsene Wenger, firing 228 goals in 375 appearances for the Gunners, while adding 90 assists.

Pepe is some way off that record, with five goals in 27 games and just four assists, but at 24 years of age, has the potential to be a real asset for Arsenal as Arteta looks to rebuild his squad in the summer.