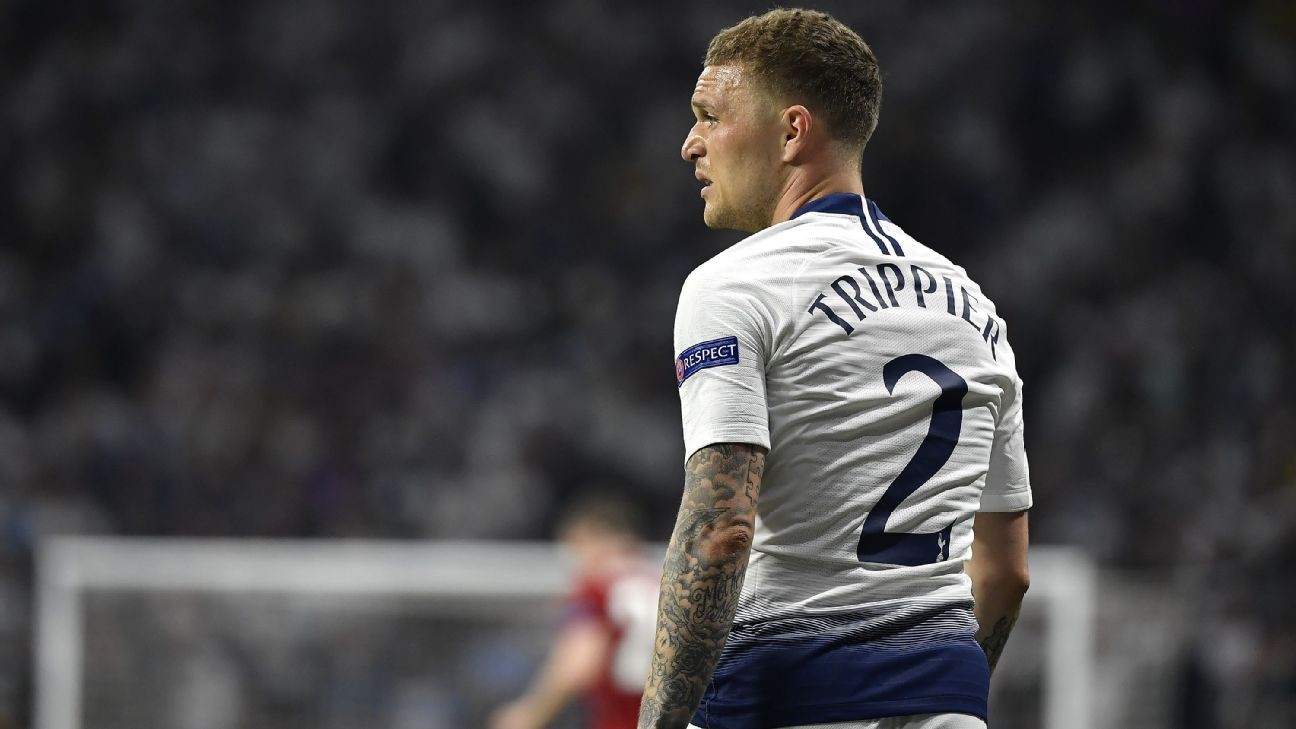 Hector Herrera outlines why he chose Atletico Madrid and the achievements he hopes to accomplish with his new club.

Julien Laurens questions whether Joao Felix will be able to express himself at Atletico Madrid like he's done with Benfica.

ESPN FC's Steve Nicol likes Tanguy Ndombele for Tottenham but wonders what part of the midfield he will occupy with Christian Eriksen, Dele Alli and Moussa Sissoko all with clearly defined roles.

Atletico Madrid are set to complete the signings of Kieran Trippier and Mario Hermoso  after making a breakthrough in the negotiations with Tottenham Hotspur and Espanyol respectively on Tuesday, sources have told ESPN FC.

Atletico are finalising the details of both deals which will be completed at around €25 million each and that will serve to complete Diego Simeone's defensive overhaul following the summer departures of key players Juanfran, Diego Godin, Lucas Hernandez and Filipe Luis.

Barcelona right-back Nelson Semedo had been Atletico's priority but they were forced to explore alternatives due to a reluctance from Camp Nou to negotiate the departure of the Portugal international.

Sources have told ESPN FC that Atletico have also made enquiries for Paris Saint-Germain defender Thomas Meunier and Arsenal's Hector Bellerin in recent weeks. However, two weeks ago Atletico sporting director Andrea Berta decided to step up negotiations for Trippier in a deal which could rise to around €30m with add-ons.

Trippier, 28, is expected to undergo his medical in Madrid on Wednesday before putting pen to paper on a four-year-deal at the Wanda Metropolitano. Simeone knows the England international well and sources close to the Argentine told ESPN FC they see him as a "very complete player who has power, speed and a very good shot on set pieces."

Meanwhile, other sources have told ESPN FC Atletico also expect to complete the signing of Hermoso from Espanyol after three months of negotiations. Atletico will pay around €25m for Spain international, who will also sign a four-year-deal.

There had been an agreement with the centre-back since May but negotiations with Espanyol have been complicated with the Catalan club looking for €35m since Real Madrid own 50 percent of Hermoso's rights and will get half of the transfer.

Espanyol recently rejected a €20m but Atletico sent an ultimatum this week which saw the Catalans lower their demands and accept a final offer as the player only had one year left on his contract and wanted to move to the Wanda Metropolitano.

Hermoso, 24, has established himself in the Spain national team in recent months, having only joined Espanyol from Real Madrid last summer.

Meanwhile, Atletico are still working on a deal to sign James Rodriguez.

Atletico are also considering Napoli playmaker Fabian Ruiz as an alternative, but president Enrique Cerezo said on Tuesday the Rojiblancos are interested in James.

"Atletico are always interested in great players and James is a great player, but from that to him coming, there is some distance," Cerezo told reporters on Tuesday.