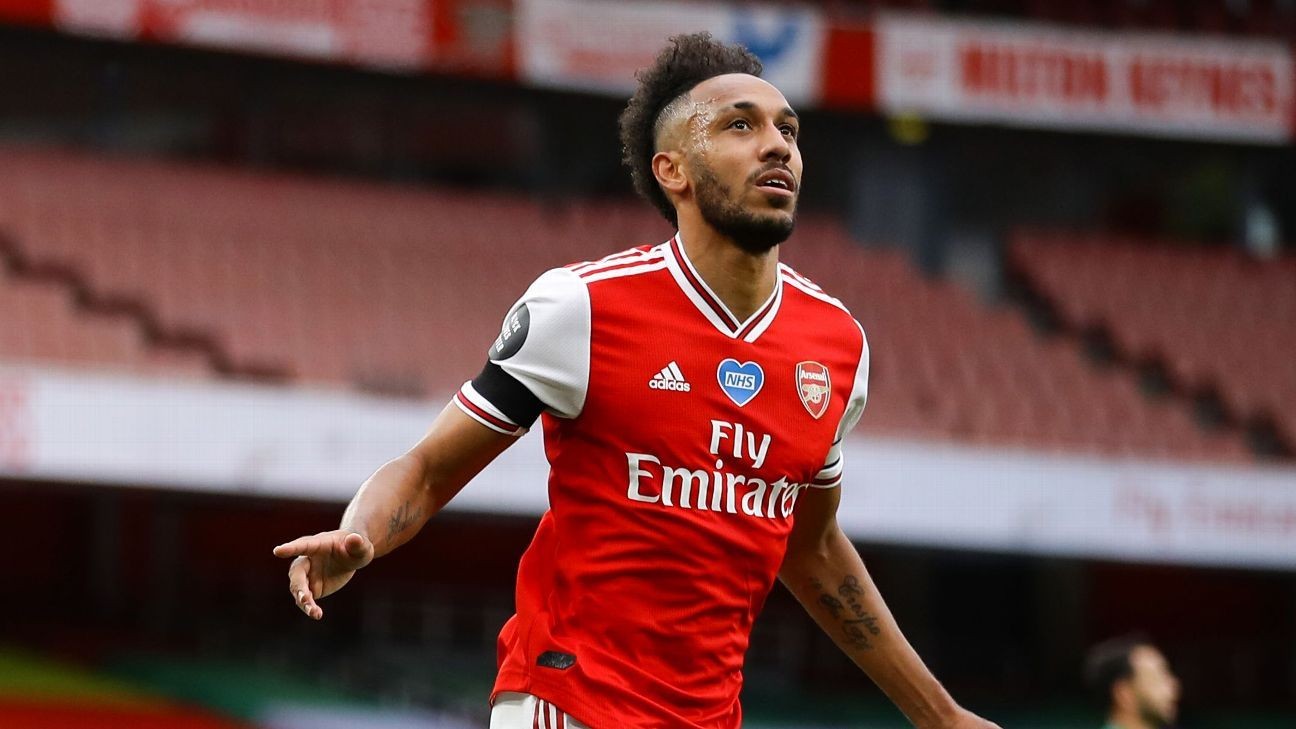 Arsenal's Pierre-Emerick Aubameyang has requested a minimum three-year contract worth up to £250,000-a-week to stay at Arsenal, sources have told ESPN.

The 31-year-old has entered the final 12 months of his existing agreement with talks underway over an extension after a delay in negotiations due to the coronavirus pandemic.

The Gunners are yet to determine their summer transfer budget amid uncertainty over which European competition -- if any -- they will be playing in next season but have made tying down Aubameyang a top priority.

Aubameyang, who is the Premier League's joint-top goalscorer alongside Jamie Vardy on 19 goals, has expressed a willingness to stay and all parties are reported to be working constructively to find an agreement.

Given his age, Aubameyang's next contract is likely to be the last big deal of his career and he is in a strong negotiating position having been a huge success since arriving from Borussia Dortmund for a then club record £56 million in January 2018.

After scoring twice against Norwich on Wednesday, the Gabon international became the fastest player to reach 50 Premier League goals (51 from 79 games) in Arsenal's history and the club are keen to reward him for his fine form.

Aubameyang's contract is worth just under £200,000-a-week but contains various add-ons and incentives related to both individual and team performance.

That series of clauses is reported to include additional appearance fees, goal bonuses and a reward for Champions League qualification.

The structuring of a new deal is being discussed in addition to the length and although it represents a considerable outlay for a player over 30, Arsenal recognise his central importance to head coach Mikel Arteta's plans.

The top end figure is also lower than the £350,000-a-week Mesut Ozil receives.

Although the Gunners' performances in the run-in could have an impact, especially if they miss out on Europe completely, there is growing confidence Aubameyang will commit himself to the club despite interest from Juventus, Inter Milan and Barcelona.

Arteta hinted at the optimism around talks with Aubameyang when quizzed about the status of talks on Wednesday, following the news promising teenager Bukayo Saka has signed a new four-year deal.

"I am very positive with that," he said.

"Every time I speak with him [Aubameyang] he is really happy where he is, he is very settled and his family are happy. Hopefully he will be on board for a long time.

"He can see what we are trying to do and hopefully he can evolve as well some parts of his game he might feel he can improve. We are pushing him every day.

"I leave that to the football club and the senior people that finalise the contracts."

Aubameyang's future could have a knock-on effect for Alexandre Lacazette. The France striker has two years left on his current contact but has attracted interest from Atletico Madrid, who wanted to sign Lacazette before he joined Arsenal from Lyon in July 2017.

The Gunners are keen on signing Atletico midfielder Thomas Partey, leading to speculation a swap deal could be possible.