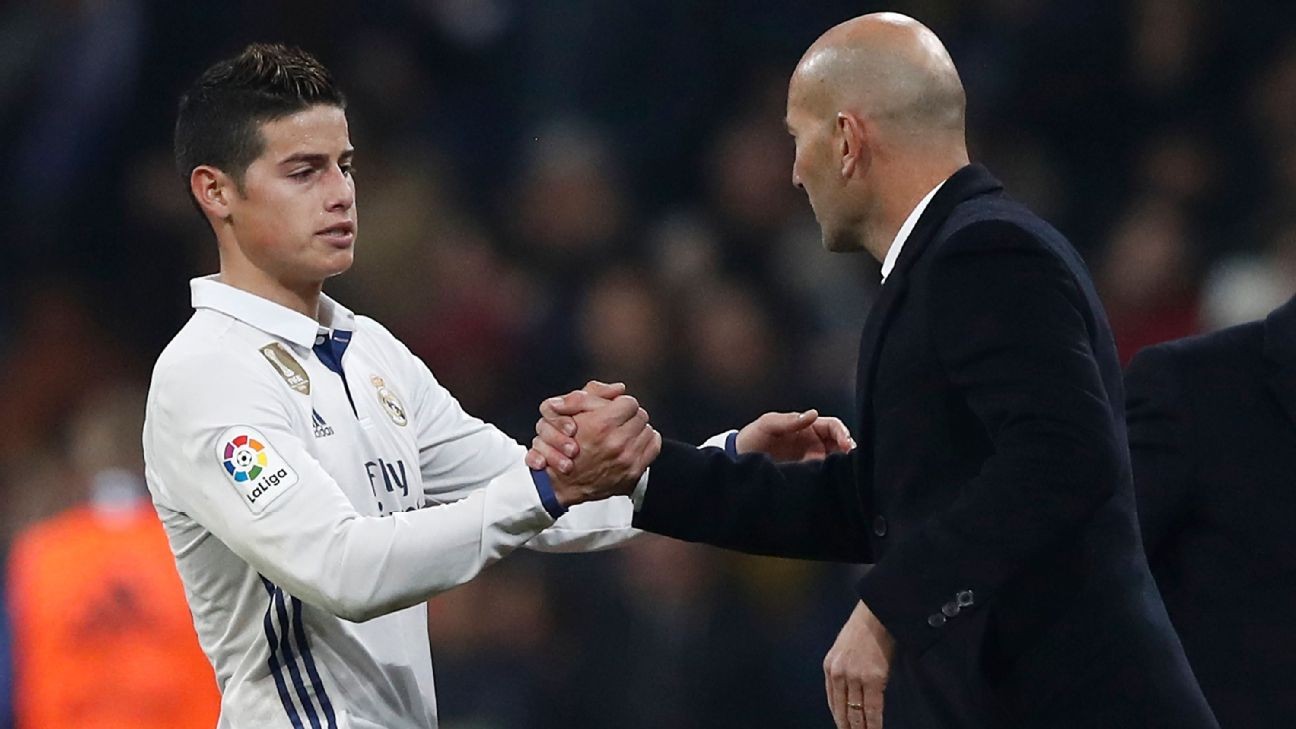 Steve Nicol explains why Diego Simeone would have to alter his coaching philosophy if Atletico Madrid sign James Rodriguez.

Steve Nicol and Stewart Robson explain why they're convinced Atletico Madrid are set up to have more success than rivals Real Madrid this campaign.

The FC crew examine Real Madrid's current issues as Zinedine Zidane's side head into the La Liga season on the back of a dismal ICC performance.

Real Madrid forward James Rodriguez plans to hold talks with manager Zinedine Zidane before making a decision on his future at the club, sources have told ESPN FC.

Last Monday, Madrid informed James they want him to stay at the club despite interest from Atletico Madrid and Napoli.

However, sources have told ESPN FC that the final decision remains up in the air because James wants to feel like an "important player" in order to "succeed" at Madrid.

James believes he can still "be a success" at the Santiago Bernabeu but he's waiting to speak to Zidane in the next few days to determine whether the Frenchman is prepared to give him opportunities and if that is not the case, he will consider leaving the club.

After spending the last two seasons on loan at Bayern Munich, James' departure from Madrid appeared to be sealed but the Bundesliga club decided against activating the option to sign him on a permanent deal.

Zidane didn't count on the Colombia international during his first spell at the Bernabeu and both Napoli and Atletico are prepared to capitalise on the situation and acquire his signature.

"I don't know if James is going to be at Real Madrid next season," Zidane said after the 1-0 defeat to Tottenham in Munich. "I'm not involved in that."

Atletico were in pole position to sign him because the Italians are only prepared to offer a loan deal and James prefers to stay in La Liga.

Last week, Atleti's CEO Miguel Angel Gil Marin confirmed the club's interest for James in an interview with ESPN but added that the final decision will depend on Madrid president Florentino Perez.

An agreement appeared close but everything changed after an injury to Marco Asensio and Atletico beat Madrid 7-3 in the International Champions Cup. Alarm bells started ringing at the Bernabeu and last Monday, Madrid told James that he was not for sale.

Sources close to Madrid have told ESPN FC that following the departures of Mario Hermoso and Marcos Llorente, the club's supporters "would be furious" if a third player was sold to Atletico.

However, they are not throwing in the towel at the Wanda Metropolitano. Sources close to the club believe that Madrid's stance is a "sign of pressure" and they are hopeful an agreement can be made before the end of the transfer window.

James continues to train and hopes to hold a conversation with Zidane.

A source close to the player has told ESPN FC he plans to continue living in Madrid meaning a move to Napoli is very unlikely, although Madrid would prefer him to sign for the Serie A club instead of Atletico.