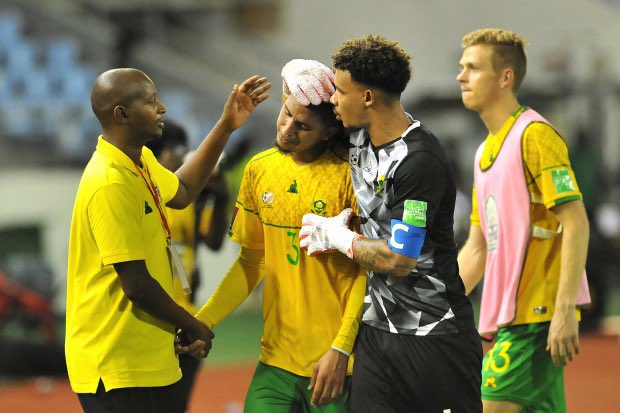 South Africa defender Rushine de Reuck has been urged to ‘be strong’ following the penalty decision against him in the 2022 World Cup qualifiers against Ghana.

Senegalese referee Maguette Ndiaye awarded Ghana a penalty after he adjudged Reuck to have fouled Leicester City defender Daniel Amartey in the box.

Ayew stepped up and scored to secure a 1-0 win to send Ghana through to the next round while eliminating South Africa.

The Mamelodi Sundowns player admitted to being deeply affected by the decision. But has received support from his former coach Eric Tinkler, who now manages Cape Town City.

“When I arrived at Maritzburg I was so surprised to see the talent they had in Rushine de Reuck, and I questioned how it was possible that no-one in Cape Town had spotted him,” Tinkler, a 1996 Nations Cup-winner with Bafana, told TimesLIVE.

“I then found out he was in Portugal for Paços de Ferreira, a team in their Primeira Liga. And I said to myself, ‘Well if that team saw the talent in him then obviously that is a fact — he’s extremely talented’.

“The other thing I saw in Rushine was his bravery. I saw him in one of our games on the floor putting his head in front of a guy’s boot to clear the ball. He is competitive by nature, and doesn’t want to concede goals.

“So the fact that he felt the way he did does not surprise me because he’s extremely passionate about his game and he wants to achieve. He wants to get back to Portugal. In my conversations with him, that has been his dream to be able to get back to Europe.

“I explained to him then, ‘If that is your dream then you need to get into the national team, because that’s going to be the platform for you to go back overseas’.

“So he’s extremely focused and hard-working. I was very happy to see him move to Sundowns. And at Sundowns he’s growing — he’s become a lot better on the ball with what they’ve been doing with him.

“So, shame, I feel for him, especially knowing that should never have been a penalty.

“I know how he feels. I qualified SA for two World Cups and didn’t go to one. And that was probably my biggest disappointment in my career.

“But he’s a strong character. He comes from a very difficult background. And he’ll get over it. He’s strong enough mentally to get over it.”

Tinkler said the experience for De Reuck, 25, a younger player drafted into Bafana as a starter by coach Hugo Broos as he has omitted front-line stars with the aim of building for the 2023 Africa Cup of Nations, will build character.

The City coach’s advice to De Reuck was: “Be strong. Don’t blame yourself because it’s definitely not your fault.

“But these things happen in football. Us coaches get hired and fired on bad decisions of referees sometimes.

“That’s the world we live in, that’s professional sport. There as to be a winner and a loser. Sometimes it’s fair, sometimes it's not. But you’ve got to get up and go again.”

De Reuck, a product of Cape Town’s ASD Academy, spent a year at Paços de Ferreira as an 18-year-old, returning to SA to play for First Division Milano United.