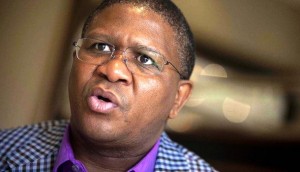 The South African Sports Minister, Fikile Mbalula, has referred to the countryâ€™s national football team as â€œuseless bunch of losersâ€ after they lost to Nigeria in the group stages of the African Nations Championship (CHAN).

He said that the performance of the Bafana Bafana on Sunday, in its 3-1 defeat to Nigeriaâ€™s Super Eagles, which led to their exit from the tournament, was â€œnot even lacklustre, it was useless,â€ and a â€œdisasterâ€.

He told a news conference that the squad is â€œjust a bunch of unbearable, useless individuals.â€

Although, the Minister noted that South Africaâ€™s problem was that of organisation rather than lack of talents, he however said â€œWe indeed have a crisis of monumental proportions.

â€œThat mediocrity that was displayed yesterday we must never wake up to that again.

â€œI felt like just standing up and walking out.â€ he said, while expressing his anger while watching the game.

Hosts South Africa needed only a draw to advance to the quarter finals of the African Nations Championship (CHAN), which is organized by the Confederation of African Football (CAF) for African players based on the African continent.

Nigeria now proceeds into the quarter finals as runner-up to Group A winners, Mali.