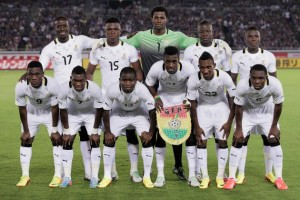 South Korea closed off its pre-World Cup practice to the media in Miami on Saturday, hoping to keep their strategic cards close to the chest in the build-up to the friendly against Ghana on Monday.

Head coach Hong Myung-bo and his 23-man squad are nine days away from their opening Group H contest against Russia in Brazil, with matches against Algeria and then Belgium to follow at the quadrennial event.

Before that, South Korea is scheduled to play Ghana, also a World Cup participant, in Miami on Monday.

It will be South Korea's final tune-up match before the World Cup.

The team will arrive at its Brazilian base camp in Foz do Iguacu on Wednesday.

When defensive back Hong Jeong-ho, who suffered a bruised foot in South Korea's 1-0 loss to Tunisia on May 28, was declared healthy enough to join the practice on Thursday, coach Hong kept out the media and fans for the first time. He remained secretive.

An official with the Korea Football Association (KFA) said only that Hong would put players through set piece drills and also hold sessions to improve defensive organization.

"Coach Hong said these two days of practice in Miami would be really crucial," the official explained. "If our set piece formations get publicized through photos, we'd be essentially handing key information to our opponents."

Hong said he wants to prevent players from suffering momentary and often critical lapses of concentration when defending set pieces.

"As long as you can figure out the other team's patterns, you can guard against set pieces," he said. "Whenever we've allowed goals on those situations, it was due to our loss of concentration."

He has but one match left to test the players' mettle, and Ghana, ranked 37th, will present a tough test for the 57th-ranked South Korea.

Hong said he will look for better efforts from his team, after a lethargic loss to Tunisia at home.

"It's important that players won't be injured," the coach said. "But our players will have to execute better than they did against Tunisia."