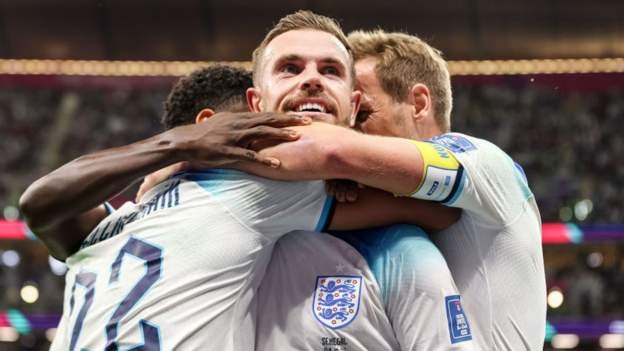 Jordan Henderson's sweeping finish was not simply the pivotal moment in England's World Cup win over Senegal but a vindication of manager Gareth Southgate's sure touch in team selection.

Henderson has been a lightning conductor for critics ready to poke at Southgate's perceived conservatism, but if one pick showed the England manager's priceless ability to shut out the noise and focus on the requirements of tournament football it was his decision to stick with Liverpool's 32-year-old captain.

Needless to say, the court of social media opinion was vociferous in its condemnation of the choice before the game but Southgate is impervious to such outside influence and Henderson was central to a 3-0 win that sets up a quarter-final with France on Saturday.

When England were struggling against the USA in the group stage, Southgate ignored those of us who felt Manchester City's Phil Foden was the answer and called on Henderson to restore control with his vast experience. He did the job, then did it again in the 3-0 victory that sent Wales home as England topped their group.

Henderson may lack the so-called "X Factor" of many of those around him in England's squad, but as old Liverpool manager Bob Paisley used to say: "You need somebody to carry the piano before anyone else can play it."

This is a quality and team ethic Southgate recognises in Henderson and why he will start again against France. The manner in which he, Jude Bellingham and Declan Rice combine in midfield now looks an unbreakable link.

Southgate said: "Jordan has been outstanding. He's such a leader. He knits the team together and around the camp he's brilliant. His performances have been top drawer."

Henderson's game intelligence does indeed allow those such as Bellingham to flourish and it was significant that the 19-year-old pointed at his more experienced team-mate to demand applause and recognition after they combined for England's first goal.

Former England defender Matthew Upson told BBC Radio 5 Live: "Henderson is the one selection up for debate but not now. The midfield three in this match has been the standout for me. Henderson arrived in the box all the time and he had the freedom to do that knowing Declan Rice was behind him."

Bellingham said: "He was brilliant. I have seen some of the rubbish about him playing. It's ridiculous. He is so underrated technically. He delivered in a big game with a massive goal. I think it's time he gets a bit of respect."

Another of England's young brigade, Foden, added: "Jordan is massive. When someone is not doing something right on the pitch he is quick to tell you off. I don't mind that. He is a leader and a captain of his club and has that in his locker."

Henderson's inclusion was one element of a Southgate team selection that drew plenty of comment in and around Al Bayt Stadium when the team was announced, but those of us who raised an eyebrow - perhaps even two - must accept he got it absolutely spot on.

And respect, too, has to go to Southgate for once again showing a singularity of purpose to stick to what he believed would get the right result.

Marcus Rashford's two goals against Wales might have persuaded other managers to make the populist choice and pick the Manchester United forward but he went back to the bench and Arsenal's Bukayo Saka returned. Foden also kept his place with Raheem Sterling absent dealing with the aftermath of a break-in at his family home in London.

Foden made two goals. Saka scored one. Southgate got it right.

Southgate is now experienced in the art of tournament management after reaching the World Cup semi-final in 2018 and the Euro 2020 final. When they ran out of momentum and were relegated from their Uefa Nations League group, Southgate revealed he had reflected on these struggles and decided it was time to be ruthless.

This is reflected in the teams he is picking. He is shutting out the noise from elsewhere, building his team through the tournament, and that measured approach is producing a group that is a growing threat.

England's midfield triumvirate of Henderson, Rice and Bellingham looks perfectly balanced with the front trio of captain Harry Kane, now only one behind Wayne Rooney's international record of 53 following his goal here, is the ideal fulcrum for Foden and Saka in the wide positions.

It is a telling statistic that England's 12 goals in four games at this World Cup have been scored by eight players as Southgate has manoeuvred his squad expertly.

Will Southgate risk upsetting the delicate balance he has achieved in this England side by utilising an extra defender, using three at the back as insurance and entrusting the pace of Kyle Walker to somehow subdue the jet-heeled Mbappe?

It is another pressure point for Southgate and his staff but the reassuring fact for England's fans is that he got the big selection calls right against Senegal. He must be entrusted to do the same again come Saturday night.