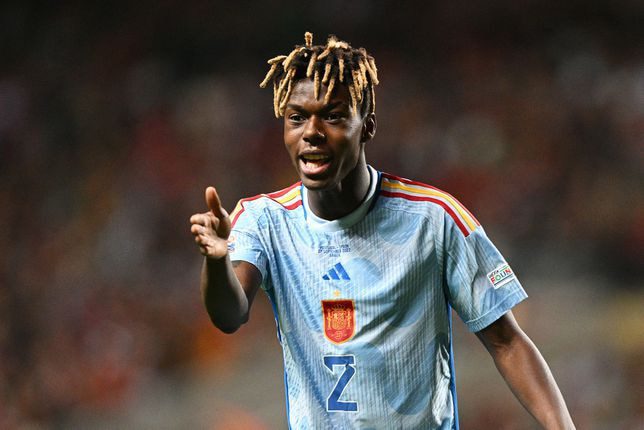 After this month's international matches, young forward Nico Williams is expected to be included in Spain's World Cup squad.

Williams impressed the Red Fury in his two appearances, particularly on Tuesday, when he assisted the winner as Spain beat Portugal to qualify for the UEFA Nations League semi-finals.

Two little moments have been enough for the Ghanaian to earn the ticket to be in the World Cup.

The brilliant and decisive appearance of him yesterday against Portugal puts the coach Luis Enrique in the wonderful commitment of being forced to call him up in the final list for Qatar.

Nico Williams was the last change made by Luis Enrique. He came on for Ferran Torres in the 72nd minute. His presence gave Spain verticality, depth, speed, breaking free from their markers, self-confidence to face, daring, and courage.

So much so that his teammates were constantly looking for him to give him the ball and that the young 20-year-old Athletic striker played it one on one.

Against Switzerland, on the day of his debut, Nico entered on the right wing, as he usually does at Athletic.

On Tuesday, as was seen in the goal, Nico entered the left wing. Yeremy Pino was in charge of doing it on the right side.

The debate is on the street. Should Nico Williams go to the World Cup? Will Luis Enrique be able to leave him out of the final list? If it's because of the fans and the sensations of yesterday, yes.

At game time, Spain had 70% possession of the ball, but had not shot even once between the three posts. In that 60th minute, Luis Enrique used Gavi, Pedri and Yeremy.

Ten minutes later Nico came in. Spain's percentage of possession dropped to 67%, but all five of Spain's shots on goal came. The spark of Yeremy Pino and Nico wreaked havoc, much more than Ferran Torres and Sarabia in the first half.

In just a few days of living together, Nico has won over his teammates.

"Morata has told me that the goal is mine, " Nico said after the game, adding. “It's an honour to help the team and get a place in the Final Four. Little by little I am growing as a player and as a person. The coach has told me to be brave, to face up. Being in the World Cup is a decision of the coach”.

Luis Enrique will decide. The verdict of the fans is unanimous: Nico must be in the World Cup.