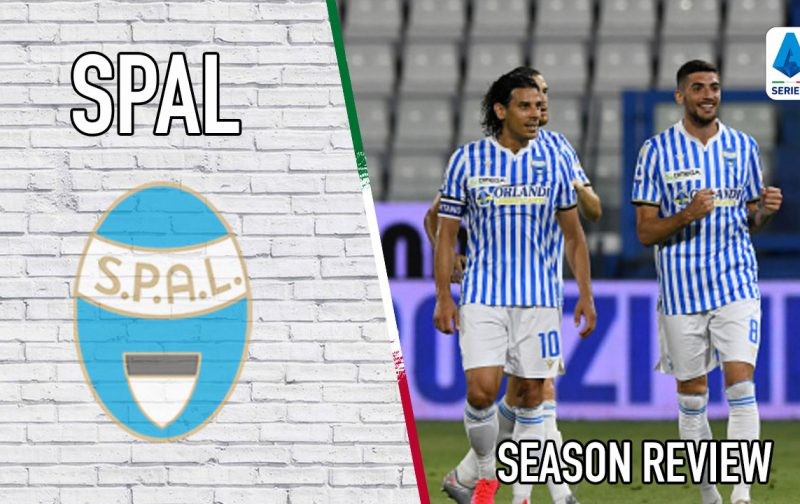 After three eventful years, SPAL’s Serie A fairytale finally came to an end as they were sent crashing back down to Serie B. In truth, the Ferrara-based club looked destined for the drop from the off and ended a miserable campaign rooted to the foot of the table.

A desperately poor start to the season suggested that Biancazzurri fans were in for a long campaign, with SPAL losing their opening six league matches and struggling to just nine points by mid-December.

Whilst they were able to stun illustrious opponents such as AC Milan and Atalanta, SPAL were never able to string consistent results together and were relegated with four games to spare.

Player of the Season: Andrea Petagna The powerful striker gave the Estense a glimmer of hope that they could beat the drop as he led the line superbly all season. With 12 league goals coming from limited service, Petagna netted almost half of SPAL’s goals this season and earned himself a January move to Napoli, before immediately being loaned back.

As the lowest scorers in the league with only 26 goals, SPAL would have been dead and buried long ago without the ex-AC Milan striker. However, after an initial burst post-restart, the goals dried up for Petagna and he failed to net at all in July as his side were condemned to Serie B. SPAL’s downfall was forged in the flames of a poor transfer window, as they struggled to strengthen a squad that finished a respectable 13th last term. Mohamed Fares looked an astute addition but missed most of the season with a ruptured ACL.

Of the few new faces that made an impact, Reca stood out for his ability to push forward from left-back and provide width down the flank. Arriving on loan from Atalanta, the Poland international was afforded his first taste of sustained Serie A action after limited appearances in Bergamo.

With two assists in 25 appearances, Reca was a useful presence in a defence that otherwise struggled badly, and may well prove to be a suitable option for a promoted team next season. After working miracles to guide SPAL from Lega Pro to Serie A in just two seasons, before establishing the club in the top flight last season, Semplici finally reached the end of the line on his magnificent journey in Ferrara. A woeful start to the campaign had him on the back foot from the off and he was unable to salvage the season before being dismissed in February.

In stepped Di Biagio, but the former Italy international fared little better and only managed to secure a further five points from 15 matches as SPAL finished bottom of the pile.

Just as relegation was starting to look inevitable after Christmas, SPAL stunned Champions League chasing Atalanta on their own patch. Going into the game at the Gewiss Stadium at the foot of the table, Petagna and Mattia Valoti struck to overturn an early Josip Ilicic goal and move SPAL to within a point of safety.

Whilst it failed to be the catalyst for a survival push, it saw SPAL join a select group of just five teams, including Juventus and Inter, to leave Bergamo with all three points this season. SPAL endured a nightmare week in mid-July that was indicative of their dreadful season. With safety slipping ever further away, they welcomed Inter to the Stadio Comunale and failed to even register a shot on target in a 4-0 defeat.

Worse was to come however, as a last gasp Brescia goal saw their relegation rivals come from behind to seal a 2-1 win and condemn SPAL to Serie B. As if the week wasn’t bad enough, Roma rubbed salt into SPAL’s wounds with a humiliating 6-1 victory in Ferrara, as the leakiest defence in the league was torn to shreds.