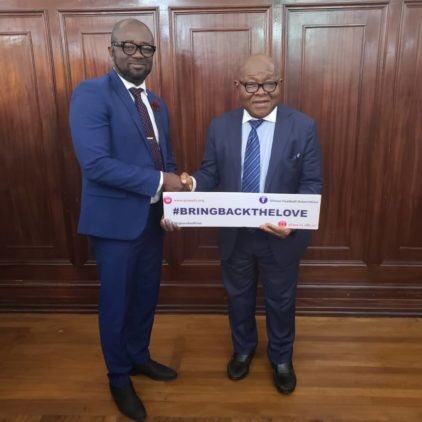 The Speaker of Parliament, Rt. Hon. Prof. Mike Ocquaye has commended the Ghana Football Association for the vigorous #BringBackTheLove campaign it has launched to court public support and bring back the love for football in the country.

Addressing members of the Executive Council of the GFA during a courtesy call on him and the Parliamentary Select Committee on Sports in Parliament yesterday, the Speaker said he was overwhelmed by how the campaign was effective and attracted massive support for the Black Stars during the recent African Cup qualifier between the Black Stars and South Africa in Cape Coast.

Prof. Ocquaye revealed that considering recent events in Ghana football, especially with the Black Stars, he was skeptical fans would not turn up to watch the match when he heard the Black Stars would play South Africa in Cape Coast.

The Speaker, however, revealed that he was surprised with the attendance at the Cape Coast Stadium and the overwhelming passion the people of Cape Coast showed.

He attributed the remarkable turn around to the GFA’s #BringBackTheLove campaign.

“I want to commend you for what you did before the last Black Stars match in Cape Coast,” said the Speaker of Parliament.

“I hear you did a lot by distributing these things (#BringBackTheLove paraphernalia) to people in Cape Coast and its surroundings and also rallied support for the team.”

“What you did was good and it helped in rallying support for the Black Stars. We follow football so we know what has been happening.”

The Speaker urged the GFA to continue with its efforts to bring back the love for Ghana football, assuring that Parliament will do its best to offer the GFA the necessary support.

GFA President Kurt Okraku expressed admiration for the Speaker’s deep knowledge on current football issues in Ghana, and thanked the Speaker for his commendations and assurances.

He assured the Speaker the GFa will not relent in it's efforts to ignite passion and bring back the love of Ghanaians for Ghana football.

The GFA President was accompanied to Parliament by the Executive Council and some staff of the GFA.