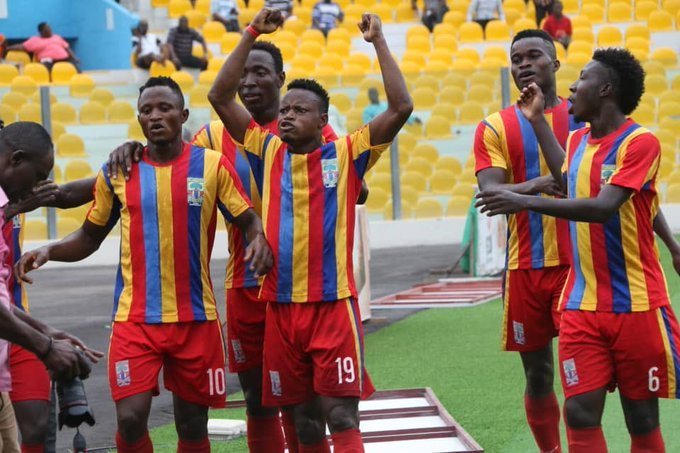 Hearts of Oak came from a goal down to beat Ebusua Dwarfs at the Cape Coast Stadium to extend their unbeaten run to five games without defeat.

Manaf Umar's second half goal was enough to secure all three points for the Rainbow club.

The Crabs wasted no time in taking the lead at home after Albert Hammond headed in from a cross on the right just five minutes in the game.

Hearts had started the game well, but the determined home side made it count from the first chance of the game.

The Phobians started probing for an early response and twelve minutes later Joseph Esso was brought down in the box.

The striker, who missed from the spot against Dwarfs in Accra left the ball to Christopher Bonney, who expertly converted the penalty to level the scores in the game.

Bonney, who was making a return to the line up after missing the draw against Liberty was scoring against his former club.

Moments later, Esso, another former player of Ebusua Dwarfs nearly put Hearts in the lead only for his effort to go wide.

It was end to end stuffs, with Richmond Ayi making a fine save minutes before half time.

Hearts returned from the break the much more better side, after coach Kim Grant replaced Esso with Kofi Kodzi.

Four minutes into the second half, Christopher Bonney's incisive pass found Manaf Umar, who lobbed the ball pass the Dwarfs goalkeeper to hand Hearts the lead.

Dwarfs made their first change of the game as Joseph Ampretwum made way for Obed Bentum.

The change galvanised the home side who began to ask questions with waves and waves of attack against the Phobians.

Goalkeeper Richmond Ayi became the busiest of the two shotstoppers as Dwarfs kept on attacking Hearts.

Kim Grant brough on Malik Akowuah for Michelle Sarpong with just eight minutes left. Akowuah provided shield to a resolute Hearts defence as the Phiobian secured all three points on the road.