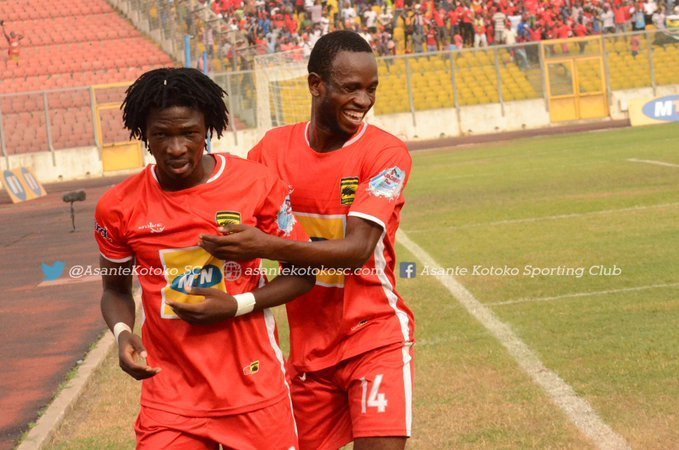 Asante Kotoko have revived their prospects of winning the NC Special Competition after defeating Medeama SC 2-0 in Kumasi in a highly tensed game.

Songne Yacouba who has been in two-minds regarding his stay at Kotoko scored his first goal of the competition for the Porcupine Warriors as they defeated Medaema who were Group A leaders at the Baba Yara Sports Stadium in match day 11 of the GFA Special Competition.

The Porcupine Warriors needed to win at all cost to enhance their chances of qualifying out of the group and they produced a masterful performance to achieve their target.

Abdul Fatawu Shafiu who has emerged as the star man for Kotoko in this competition scored the second goal of the game to secure the important win for the Porcupine Warriors. He now has eight goals in the competition.

The result also means Kotoko were able to avenge their 1-0 defeat which they suffered in the hands of the Mauve and Yellow on match day two at the Tarkwa and Aboso Park.

Kotoko will occupy top spot with 21 points after this win.

Meanwhile, at the Accra Sports Stadium, Hearts of Oak continued with their dominance as they defeated Elmina Sharks by 3-1 in this match day 13 fixture.

The Phobians have shown their intent to win this competition with some brilliant performances.

Christopher Bonny and Fatawu Mohammed were the goal scorers for Hearts in the game. Hearts have also revenged that 1-0 defeat to Elmina Sharks on match day two at the Nduom Sports Stadium.

Elsewhere, Karela United maintained their unbeaten run at the Crosby Awuah Memorial Park as they defeat Dreams FC by 2-0 on match day 13 of the GFA Special Competition.

The Ayinese club are having a good run in the competition as they look poised to pick the second spot in Group B to progress to the quarter-finals.

Solomon Sarfo Taylor and Patrick Yeboah secured the win for Karela United against a struggling Dreams side who have been poor in the competition. Karela United have accrued 24 points after this match day 13 fixture.