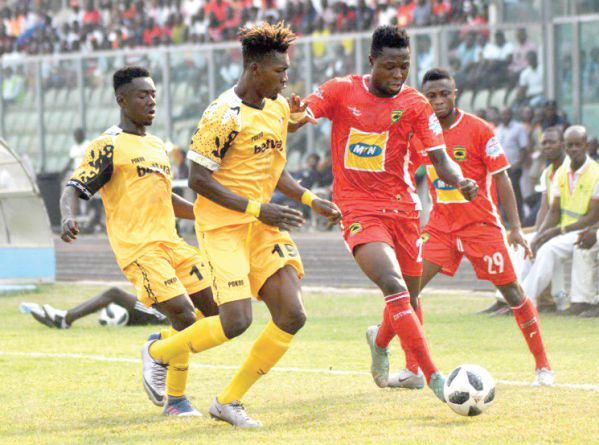 AshantiGold and Asante Kotoko will headline match day 11 of the Special Competition this weekend as both teams face off at the Len Clay Sports Stadium.

The first leg between both sides ended 2-0 in favor of the Porcupine Warriors in match day four at the Baba Yara Sports Stadium.

The miners will be hoping to revenge as well as prevent two defeats in a row heading into this game while Asante Kotoko also seek to secure top spot after dropping points at home.

Asante Kotoko were held to a draw at home by Bechem United in mid-week while AshGold lost to Medeama by 1-0 at the Tarkwa and Aboso Park on match day 10.

Elsewhere, Hearts of Oak will play away to Ebusua Dwarfs at the Cape Coast Sports Stadium.

The Phobians defeated the crabs by 2-1 at the Accra Sports Stadium in match day four.

A rejuvenated Dwarfs side will prove tough customers for the Phobians in this game. Hearts drew against Liberty in mid-week while Dwarfs also drew against Elmina Sharks.

Zone A leaders, Medeama will travel away to play Bechem United on match day 11.

The Mauve and Yellow currently sits on top of the group with 19 points after match day 10.

Medeama will be hoping to stretch their lead on the table with a win against Bechem in this fixture.

Week 11 fixtures at a glance

Eleven Wonders vs Wa All Stars