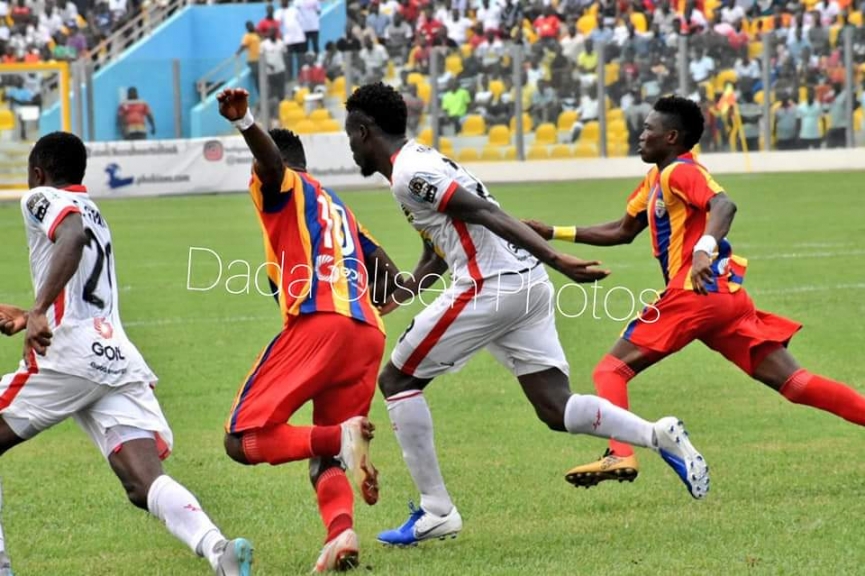 Asante Kotoko advanced to the finals of the Special Competition following penalty shout victory against bitterest adversaries Hearts of Oak at the Accra Sports Stadium on Sunday.

The game ended 1-1 after 90 minutes with goals from Abdul Fatawu Safiu and Christopher Bonney for Asante Kotoko and Hearts of Oak respectively.

The game ended 1-0 in favour of Asante Kotoko after 45 minutes as little chances were created after Naby Keita and Abdul Fatawu Safiu's superb combination that brought the first goal.

In the second half, Asante Kotoko left the game to Hearts of Oak to dominate and showed mild importance to the game with extreme interest to defend the 1-0 lead.

With so much left to be played for in football, Kim Grant adapted an attacking option to create more chances by introducing Abubakar Traore and Malik Akowuah into the game.

Hearts kept pushing for the equalizer with their fertile attacking options until the final minute were Wahab Adam failed to exert the mounting pressure from the Hearts of Oak attack and handled the ball inside the box to give Hearts of Oak a penalty kick.

Christopher Bonney coolly stepped up and slotted home with aplomb to draw Hearts of Oak level into the game.

The game traveled to penalty shootouts to determine who seal the berth into the final and Asante Kotoko triumphed with a 5-4 victory.

The result will mean Asante Kotoko get a place Africa next season and will face off Karela United in the finals as the Anyinase-based side traveled to beat AshantiGold at Obuasi by 1-0.