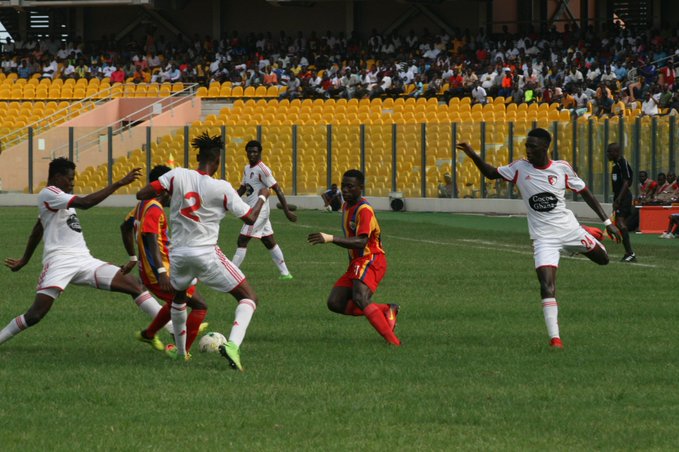 Hearts of Oak recorded their heaviest win in the ongoing GFA Special competition after defeating West Africa Football Academy (WAFA) by 4-0 at the Accra Sports stadium on Sunday.

The Phobians who lost 2-3 in the reverse fixture were able to secure their revenge after losing to the Sogakope side on match day seven at the Red Bull Arena.

Michelle Sarpong scored the opening goal of the day after firing a strike past the WAFA goalkeeper on the half hour mark.

Hearts dominated the game after the first goal and increased their lead with just some few minutes to end the first half.

Hearts of Oak skipper Fatawu headed in a cross from Christopher Bonny from the right flank to make it 2-0 for the Phobians.

The first half ended with Hearts going into the break with a 2-0 lead.

The second half started with much more intensity as the Phobians continued to dominate and control the game.

Umar Manaf scored the third goal of the game to make it 3-0 for Hearts. Substitute Kofi Kordzi scored a spectacular solo goal after beating four defenders of WAFA and slotted in the fourth goal of the game.

This is the first time Hearts have beaten WAFA by a 4-0 margin in any competition.

Elsewhere, Aduana Stars recorded another win in the competition against Bechem United as they defeated their regional rivals by 2-0 at the Baba Yara Sports Stadium on Sunday.

Aduana Stars are playing home away from home after their grounds were banned for crowd disturbance.

Yahaya Mohammed and Abdul Fatawu scored the goals for the Ogya lads in this fixture to secure the three points.