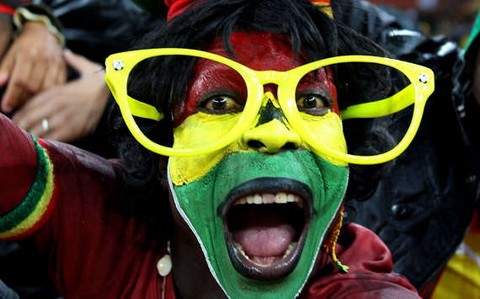 Football fans are over the mood about the game

Sport occupies an extremely important place in human life. Sport is not only able to create a healthy body and a healthy mind, but also significantly change the quality of life, help to embody many dreams come true, to succeed at the global level.

Today the world is developing rapidly, technical progress creates hundreds and thousands of new areas, and we are witnessing the popularization of various sports, the number of which also increases significantly.

Thus, the importance of sports in a person’s life, regardless of his profession, no doubt. It doesn't matter if he does it professionally or not, sport should be present in the life of every person.

There are more than 200,000 kinds of sports in the world, but why exactly football is a sports number 1 for millions of people? It's simple, football is played everywhere: from hot Africa and Brazil to cold Russia and Norway.

To play football, you need a ball, and that’s what it’s all about the beauty of this sport. You can play it just on the beach, with friends in the courtyard and so on.

During the period when football matches take place, the whole city seems to freeze, life stops and focuses within the field. What is most surprising, this sport is interesting not only for men but also women with children.

This game can assemble and connect in unison tens of thousands of fans, and this is just amazing. In some countries nationwide weekends are declared at the time of important matches because people can’t focus on routine matters.

World Cup championships make life during a tournament completely different. People waiting for the Champions League matches, look at the tournament table and live football. An incredible hype begins from watching TV at home to talking by passing people who discuss the last match.

Football players get big money and can you imagine football clubs buy players for hundreds of millions of dollars! This is money that is given for the player, just rolling over to another club. It would be impossible if football was not so popular.

And at least after thousands of years, no other sport will replace it, because nowhere else that kind of money is involved. And while basically only football is shown on TV, kids and teenagers constantly play a ball on the street, nothing will change.

It is unlikely that you will see tennis or hockey being played on the street, as they need more conditions and investments. Undoubtedly for millions of people, football is life. These are entirely different emotions that you will not experience in life.

The joy of your favorite team winning, the bitterness of defeat ... Football is a dynamic game in which it is difficult to predict the outcome. Often you have heard such a phrase - this is football, there can be everything ... and this true.

And curious goals, tough battles, deletions, beautiful combinations - this is only a small part of what can happen in 90 minutes of normal time. By passions, emotions, fans around the world with football, nothing compares.

The popularity of football is due to its entertainment and mass character. The game feels tense which slips in many moments and is transmitted to the spectators in the stands and at the TV screens.

On the one hand, the game is simple and uncomplicated, but therein lies its grandeur. The viewer likes the dynamism of everything that is happening because something happens on the field every second, and the players are in constant motion.

If you believe the statistics, then everybody played football, at least once in a lifetime, and understands how many positive emotions can this process give. Watching your favorite team's game is not just entertaining, but also useful, because this leisure helps to burn calories.

In addition, the main factor in such popularity is accessibility. Found the ball and that's it. Gates can be made of bricks. Probably many in their childhood made homemade gates and chased the ball after school.

Of course, in many countries, football is not a leading sport, but we take into account the total population. From childhood, people play one district against another district, school against school and so on. Besides, football is a useful sport that develops your body and spirit. That is why football will always be the most popular sport.

This short speech about soccer is provided by experts from speech writing service which is committed to help students with informative, motivational and persuasive writing.