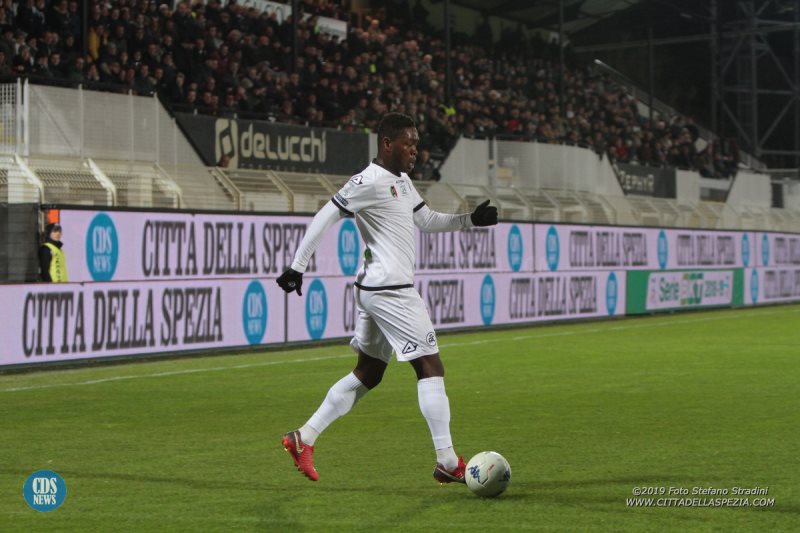 Spezia FC striker Emmanuel Gyasi has expressed his disappointment after their last-gasp defeat against Carpi FC in the Italian Serie B on Saturday.

Carpi started the match on a bright note before Mattia Mustacchio sent their teeming fans at the Stadio Sandro Cabassi into ecstasy mood after his 30th minute strike.

But the visitors came back strongly in the second half and deservedly pulled parity four minutes later, thanks to Emmanuel Gyasi.

Nigerian forward David Okereke put Spezia ahead for the first time in the match on the 72nd minute with a fantastic goal on the edge of the area.

With Carpi looking well equipped to run away with the three points, two goals from Davide Marsura and Mamadou Coulibaly in the 85th and 91st minute respectively broke the hearts of the travelling supporters as the hosts won the game 3-2.

During the post-match interview, Gyasi was upset by his side's collapse at the death of the game but indicated that it will serve as a learning curve in their subsequent matches.

"We are really angry because we did not deserve to get defeated by this challenge, but now we can not help but think about Wednesday, determined more than ever to return to success, learning from our mistakes," Gyasi stated.

"In the first half we did not come down to the field with the usual approach, but in the second half we were good at getting back on track, overturning the result and keeping the reins of the game well, at least five minutes from the final whistle when we threw air the whole game, more malice is needed, both to close the matches and to maintain the result and in this we must surely grow fast."

Gyasi has scored three goals and recorded two assists in 23 appearances for Spezia in the ongoing Serie B campaign.

Spezia will aim to quickly bounce back from the defeat when they welcome AS Livorno to the Stadio Alberto Picco on Wednesday.