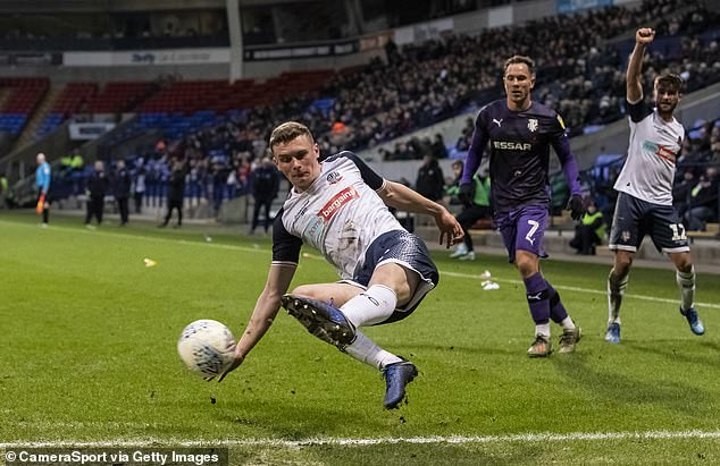 Manchester United have waived the outstanding loan fees for three of their players — saving a trio of cash-strapped clubs a combined £130,000.

The Premier League side have told Hearts, who had taken goalkeeper Joel Pereira, Bolton Wanderers, who had borrowed midfielder Ethan Hamilton, and Burton Albion, who had brought in keeper Kieran O’Hara, that monies owed will not be called in.

United insiders said they felt it unfair to increase the financial pressure on smaller clubs already reeling from the coronavirus pandemic and its impact on the game. Instead, they will swallow a six-figure loss.

Agnew blow as BBC set to halve his pay

It has not been the best of times for Jonathan Agnew.

Around a year ago, the longstanding BBC cricket correspondent became involved in a spat with Jonathan Liew which did him few favours, especially when messages in which he labelled his fellow journalist a ‘c***’ were made public.

The row — which led to a reprimand for Agnew from the BBC and the 60-year-old deleting his Twitter account — even made the pages of this year’s Wisden almanack.

Insiders have now disclosed that the former Leicestershire and England bowler’s turbulent 12 months has continued in contract renewal talks with the broadcaster.

The BBC declined to comment, but sources say Agnew’s new deal represents a ‘significant reduction’, thought to be around 50 per cent, from the £170,000 to £174,999 bracket he had previously enjoyed.

It is safe to say news of the cut has gone down well with many at the BBC’s MediaCity base. The majority of staff in those offices could only dream of such lavish remuneration.

Face mask merchandise to be unveiled at Royal Ascot

Royal Ascot, if it goes ahead from June 16 behind closed doors, will be stripped of its annual fashion parade but one major race meeting has used the virus as an opportunity to produce an accessory.

Merchandise for the Breeders’ Cup meeting — at Kentucky’s Keeneland racecourse in November — includes a branded face mask, available at $15 each or three for $25.

Proceeds from any sales will go to Covid-19-related charities.

It’s easy to think of a few publicity-hungry bookmakers who might be eyeing a similar marketing opportunity in Britain.

Discussions are ongoing over how stadiums will look should the Premier League return.

One feature expected to get the green light is thank-you messages for NHS staff and other frontline workers.

Clubs are exploring painting tributes on empty seats, while slogans of appreciation are likely to be flashed on advertising hoardings during games.

Premier League clubs are turning to players to provide content from training grounds for their websites and social media platforms.

That follows the decision by many clubs not to include press officers in the first wave of employees allotted virus tests, thereby allowing them into the inner sanctum of the training ground.

‘They can carry on for as long as they like,’ mused one staff member, perhaps glad of the extended break at a time of year when they are usually most busy.

Michael Vaughan was always known as a captain who tried to get his team on the front foot.

No surprise, then, that he has taken the same approach on social media.

The batsman-turned-commentator has been a prolific poster of videos during the lockdown, sharing clips of his cooking skills using a pizza oven in the garden of his Cheshire pad.

But it would appear not everyone has enjoyed Vaughan’s content, with the 45-year-old on the receiving end of some nasty messages.

On Saturday he shared one such post along with his response — which was as blunt as you might expect from a Yorkshireman (albeit one born in Manchester).

Russia's Olympic speed-skating champion Svetlana Zhurova knows how to kick a man when he’s down.

Soon after International Olympic Committee president Thomas Bach’s BBC interview, in which he said next year’s rearranged Olympics could be cancelled due to the pandemic, the favourites to host the 2032 Games, Brisbane, declared they were putting their bid on hold indefinitely. Zhurova then took to Russian media, questioning if there would even be a need for the IOC should Tokyo be canned.

With their huge new headquarters on the shores of Lake Geneva housing over 500 staff, it is a question others may begin to ask.

It may not have gone down well with Sky supremo Stephen van Rooyen that Premier League chief executive Richard Masters opted to do an exclusive interview with the BBC’s Dan Roan when major clubs hope they can avoid a substantial rebate to broadcasters including Sky Sports.

After being contacted by Sports Agenda both Sky and the Premier League claimed there were ‘no issues’.

However, Roan’s coup sparked anger among those who work in Sky’s newsroom, while BT Sport and major international partner beIN would also be entitled to feel aggrieved.

It is believed Masters is set to speak to Sky later this week, when the picture over the return of football may well be clearer.

David Dein is a man of many talents although, up until Friday, stand-up comedy was not thought to be among them.

The former Arsenal vice-chairman and FA board member gave a talk from his home to children via the Speakers for Schools platform and, after being introduced by Ian Wright, kicked things off with a couple of gags.

‘Why is a bowl of flowers a good present for a Manchester United fan?’ asked the 76-year-old. ‘Because they look good in the middle of the table.’

Tottenham were next up. ‘I saw a Spurs season ticket nailed to a tree the other day while out walking,’ said Dein.