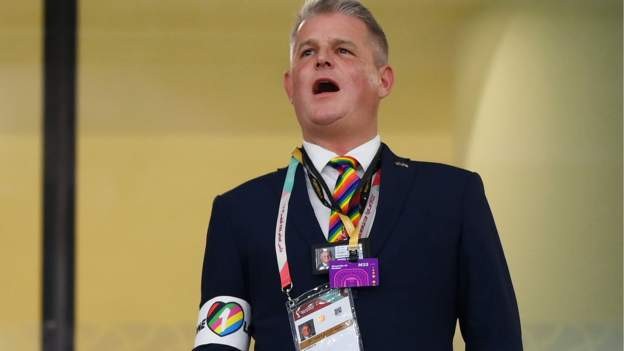 England and Wales were among seven countries to abandon plans to wear them during matches because players faced disciplinary action if they did so.

Andrew, who is openly gay, opted to wear the armband to promote diversity and inclusion from the stands.

It comes after Qatar World Cup chief Hassan Al-Thawadi said the armbands were sending out a "divisive message".

Speaking to BBC sports editor Dan Roan before the game, Andrew said he did not want to hide who he is.

"In the unique position I have, as a sports minister, I feel I have to represent everybody and to say to Fifa to please have a look at these issues," said Stewart.

"There are a lot of fans out there who want to come and support their teams. We have a great match going on tonight, it's just sad some people feel they can't come."

Stuart did, however, say that the UK could learn some lessons from how Qatar has hosted the event.

"There have been mixed reports and that is why I needed to come here myself," he added.

"The majority of fans have been telling me what they were expecting and what they are experiencing is quite different.

"There have been some very positive things here and there are some areas where the Qataris have addressed things quickly when things have gone wrong.

"They have provided some fantastic facilities for disabled fans and we may have learned some lessons from that, but there are other challenges too.

"It's only if you come here and see it for yourself that you can actually then consider it and also to look the Qataris in the eye and have those honest conversations as good friends."

When Louis Theroux met Bear Grylls: Did he find the real man beneath the tough-guy exterior?She scammed the world, then vanished: The 'Cryptoqueen' who persuaded millions to join her financial revolution