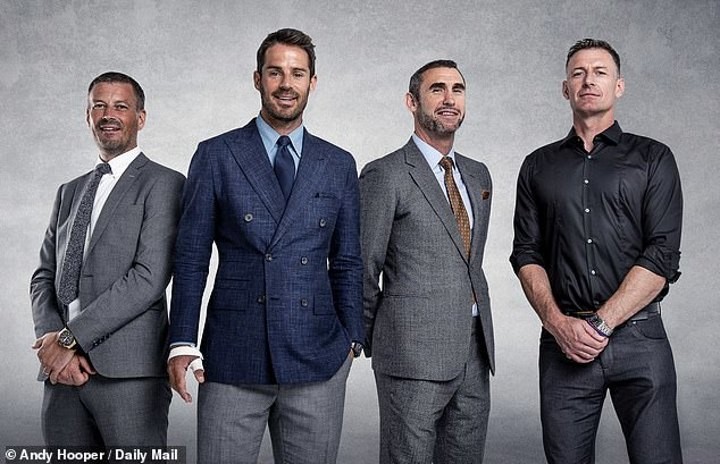 The Premier League is set to follow in the Bundesliga's footsteps and make its long-awaited return to action next month.

Players and managers in England's top-flight have return to training in small groups as Phase One of Project Restart gets underway.

But has it been plain sailing up until now or has there been bumps along the way? Here, Sportsmail's experts JAMIE REDKNAPP, MARTIN KEOWN, CHRIS SUTTON and MARK CLATTENBURG discuss the Premier League's attempts to get going again.

REDKNAPP: Troy Deeney and N’Golo Kante have opted to refrain from training. But I’ve spoken to Premier League managers and there is a real fear that many more could follow down the line. This could become a problem. If you’ve got a squad of 22 players and six decide to stay away, how can we then say this is a fair competition? A club could be relegated without the full use of their squad.

SUTTON: Six positive tests out of 748 taken was good news for Phase One. Then on Saturday the Premier League confirmed that only two out of 996 had tested positive from the second round of testing. But what would happen if a manager fell ill? It only took Mikel Arteta testing positive for the Premier League to be suspended in the first place. If that happened again, would the show grind to a halt? In Germany, it seems they’re playing on. Augsburg boss Heiko Herrlich nipped out for some toothpaste, got into bother for breaking quarantine and they restarted the season without him.

KEOWN: Remember Germany suffered their own setback with Cologne. Three players tested positive during training. Now we’ve seen Watford encounter difficulties, too. But it’s good to see football, and sport in general, returning. There was a stage when you’d hear: ‘Who cares about the Premier League while this pandemic is going on?’ But football is acting in line with society. A lot of people are attempting to relaunch their lives again, many by returning to work. Football is the same. Barring a major setback, the season could restart towards the end of June.

CLATTENBURG: Referees and their assistants are being told to continue to train at home and that’s not a problem because they are used to that. Plus their fitness is being monitored remotely by the PGMOL. During the season, officials meet up every fortnight for some physical and theory work at St George’s Park. Once they have a restart date, I’m sure a get-together will be organised and they can expect to have to undergo fitness tests then.

KEOWN: It is only right that they can make their own choice. In Deeney’s case, nothing should be more important than his five-month-old son’s health. But Watford would feel their captain’s absence if a solution cannot be found before the season’s restart. With him in the XI, their win percentage this season is 29.4. Without him, it plummets to 8.3. Deeney has been instrumental in their turnaround under Nigel Pearson. He would be a huge miss for Watford.

SUTTON: Football is a team sport but this is about personal decisions. Three weeks ago I wrote in these pages that I wasn’t sure I’d go back if asked. I wouldn’t want to put my family at risk. Yet now we’re seeing players training then heading home to their families. So I don’t blame Deeney or Kante. Yet if they’re not coming back now, you wonder when they will. Once there is a vaccine? How long will that take? So whether they should then still be paid in full is another debate.

REDKNAPP: If my team-mate said he did not want to train for health reasons, I would respect his decision. I’m sure that is how Frank Lampard reacted when Kante told him he did not feel comfortable being back at Cobham. You hope players don’t stay away for other reasons, like their contract is expiring and they don’t want to pick up an injury that could thwart a move.

CLATTENBURG: No officials have told the PGMOL they won’t be returning to work and none have been furloughed. Referees and assistants are paid a base salary but they also receive a per-game bonus and then a performance-related bonus on top of that. Those bonuses account for around 50 per cent of their wage. That is a big incentive to work but they have to make the decision for themselves and, like the players, they have to be tested regularly. I suspect if any official tests positive that will rule them out for the rest of the season.

REDKNAPP: Peer pressure would have been more of an issue back in the day. I was 18 when I walked into Liverpool’s dressing room and I’d risk being slaughtered if I said I was going to stay away. Dressing rooms could be cut-throat places then, so if my manager had told me it was time for training, I’d be getting my boots on. But in the modern era, everyone is more understanding and players have much more of a voice. It’s better this way, so hopefully peer pressure isn’t a problem.

KEOWN: Who are we to tell Deeney he has to play? That’s not down to us or his team-mates. Players are human beings and they are entitled to act the way they want — if they don’t want to return to training then that’s their decision to make. Peer pressure should not be placed on them.

SUTTON: Players have to be strong enough to do what’s right for themselves and their families. Nobody should feel pressurised. BAME players are naturally concerned and no one who decides against going back should face any criticism.

REDKNAPP: Let the broadcasters have it. They do it in America and I’ve long felt like we’re missing a trick here. I had some great times in that Liverpool dressing room after a win. To have those memories is one thing but to have footage would be even better. There is a reason why we all love Michael Jordan’s The Last Dance documentary so much. It gives you that glimpse behind the curtain. Maybe to keep the managers happy you turn the cameras off when he gets the tactics board out. But I can’t see the harm in a camera in the corner acting as a fly on the wall.

SUTTON: I’ve played with players who would be physically sick before games. Fancy seeing that in HD? Didn’t think so! I’m not a fan of this idea. The dressing room is a private place and this would make players reluctant to be themselves. I get why TV companies want it but it wouldn’t be authentic. Blackburn owner Jack Walker used to come in to play penny up the wall with us before games. Any quirks like that wouldn’t happen if the cameras were rolling. I know I would be conscious that I was being watched. That would impact my pre-match preparation.

KEOWN: Players understand now that their wages originate from the TV income and there is talk of more pre-match interviews, half-time interviews, mid-match interviews. That would risk interfering too much and I don’t have a desire for cameras in the changing room either. What I’d prefer is more transparency with the referees. Mic them up. Let them communicate with us and explain their decisions. That’s the area of the game I’d like to see developed.

CLATTENBURG: It happens in rugby. But speaking as a former Premier League referee, I’d prefer what’s said on the pitch to stay on the pitch. Maybe in the future, it would be good to hear a VAR explain why he or she made a certain call. But now is not the time for this to come into play.

REDKNAPP: Let’s not kid ourselves — it simply won’t be the same product without supporters. A crowd can make you commit to tackles. They can make you run that little harder, make you defend as if your life depends on it. There were times when I’d be knackered at Anfield and the 90 minutes were almost up but then the sound of the Kop spurred me on. Maybe the matches between sides fighting for survival will be more of a contest. But I fear some games could have a testimonial feel.

SUTTON: I thought the intensity in the Bundesliga was alive and kicking in its opening weekend. We saw some high quality football and keenly contested fixtures. We missed the fans but I was pleasantly surprised considering the guys had not played in more than two months. In a way it took me back to my reserve days at Norwich. You could hear the crunching tackles, the players shouting, the sound of the ball striking the back of the net. It was authentic football.

CLATTENBURG: Sorry Chris, but I found the Bundesliga difficult to watch. A lack of intensity is a real issue with no supporters in the stands. The European qualifier between Romania and Greece I refereed in 2014 was behind closed doors and played at a slower pace. Romania ended up winning 1-0. Would that have happened if that arena in Athens was full of Greek spectators? I’m not so sure, because they really know how to create an atmosphere. I would expect the Premier League to lose some of its excitement factor, but it cannot be helped.

KEOWN: The intensity of the Premier League is why we love it. It’s played at high speed, and that energy is created by the fans. Now they won’t be there, it will be interesting to compare to before. In Germany, it’s been made more difficult for the underdog to make their home advantage count. There are fewer elements for bigger teams to overcome.

SUTTON: That it can be done and even if supporters cannot be inside stadiums, we should embrace the product on offer. What Germany has provided isn’t perfect — it was never going to be without fans inside the grounds — but it is good enough. The Premier League will come back, somebody will play well, somebody will play poorly, and VAR will cause some sort of controversy. It will be great to have all of those debates back.

KEOWN: One thing that was lacking in the Bundesliga’s opening weekend was that they failed to pay tribute to the lives that have been lost and that felt wrong. There was no minute’s silence. At least they realised their mistake and ensured one was held the following weekend. If and when the Premier League comes back, it has to remember the victims. We cannot lose sight of why England has not seen a game of football for more than two months.

REDKNAPP: I struggle seeing players allowed to stand next to one another in walls for free-kicks or grapple at a corner but then they can’t celebrate a goal together? That’s a strange one. These guys are potentially participating in the safest industry in the world, given the environment is being completely controlled and how regularly they are tested. Germany succeeded in being the first country to bring football back in Europe, but there are still elements which can be fine-tuned.

CLATTENBURG: The Bundesliga got through a very important first weekend then the subsequent week when all eyes were on them. They did it in a professional manner — referees, assistants and fourth officials included. So can the Premier League.