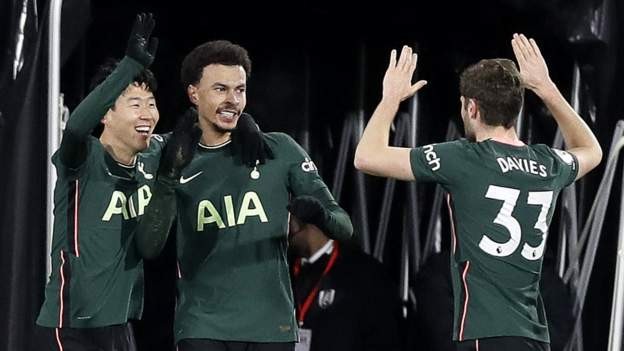 Not since beating Manchester City to move top of the table on 21 November had Spurs won back-to-back games, but a Tosin Adarabioyo own goal ensured the visitors backed up Sunday's impressive 4-0 victory over Burnley with a hard-fought three points.

Making a first league start since the opening day, Dele Alli played a key role in the visitors' 19th-minute opener as he fed the ball wide to Son Heung-min before meeting the South Korean's low cross - though Adarabioyo inadvertently got the decisive touch.

Spurs goalkeeper Hugo Lloris produced a fine save to tip Joachim Andersen's header on to the crossbar and was again called upon to deny Adarabioyo from the resulting corner as Fulham pushed for an equaliser after half-time.

Fulham - who remain three points from safety - were ultimately left aggrieved by a controversial video assistant referee decision to disallow Josh Maja's deserved equaliser just after the hour, as Mario Lemina was penalised for handball in the build-up despite his arm being by his side.

Harry Kane was denied from a diving header by Alphonse Areola in the closing stages, but Mourinho's side held firm under intense pressure from the hosts to move to within four points of the top four.

Alli had not started in the Premier League since being removed at half-time against Everton almost six months ago, but the England international replaced Lucas Moura in an exciting Spurs front four behind Gareth Bale, Son and Kane.

Mourinho said it was "amazing" to have Alli back firing following his performance against Austrian side Wolfsberger in the Europa League last week, when he scored a superb overhead kick in a promising all-round performance.

The 24-year-old impressed with an energetic display during a first half which saw the Spurs attack gradually click into gear, then ignite as Kane missed a glorious opportunity to put his side ahead but headed Son's cross too close to Areola.

Bale, also given a start despite Mourinho suggesting the Welshman might not be ready four days after his standout performance against Burnley, was the catalyst for the opener, turning quickly in midfield to set Alli away.

Alli drove confidently at the retreating Fulham defence and continued his run into the box to meet Son's cross, though the playmaker's flick was heading wide before Adarabioyo's unfortunate touch.

It was a rather different tale in the second half, which saw Alli and Bale removed after 67 minutes and Moussa Sissoko introduced in response to Fulham's growing dominance. It was far from convincing in the end, but a third win in a week makes for happy reading for Mourinho.

Attempt missed. Lucas Moura (Tottenham Hotspur) left footed shot from the centre of the box is high and wide to the left.

Attempt missed. Ademola Lookman (Fulham) right footed shot from outside the box misses to the left.

Pierre-Emile Højbjerg (Tottenham Hotspur) wins a free kick in the defensive half.

Attempt blocked. Ademola Lookman (Fulham) right footed shot from the centre of the box is blocked. Assisted by Joachim Andersen with a cross.

André-Frank Zambo Anguissa (Fulham) wins a free kick in the defensive half.