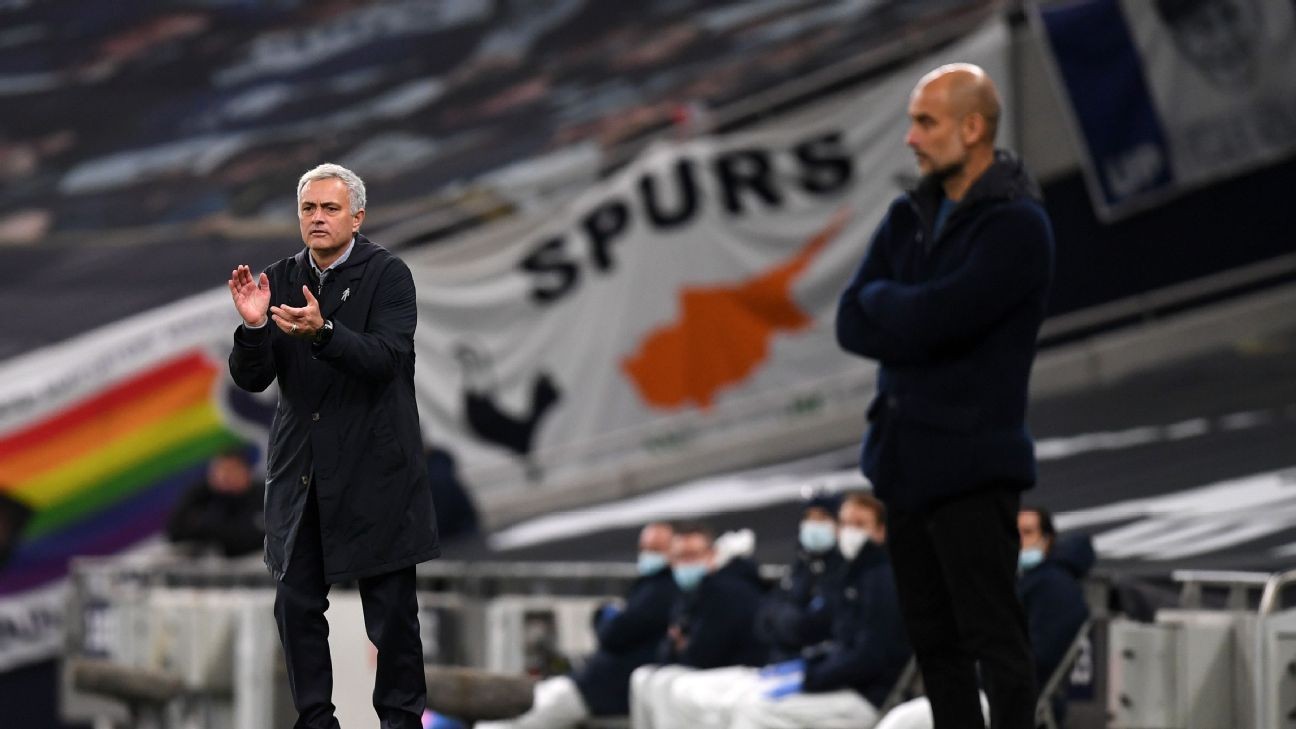 Tottenham's 2-0 win over Manchester City on Saturday hints that the Premier League might just get to witness a genuine rivalry between Jose Mourinho and Pep Guardiola after all.

When Mourinho returned to England to manage Manchester United in 2016, the script was written for the Portuguese to renew hostilities with perhaps his bitterest rival -- Arsene Wenger aside -- as Guardiola arrived across town at City in the same summer.

Although Mourinho hailed finishing second to Guardiola in the 2017-18 campaign as "one of his biggest achievements in the game," that was a comment framed in terms of the weaknesses in United's squad rather than the product of a close-fought contest. After all, City won the title by 19 points that year and retained the trophy a year later as Liverpool emerged as City's strongest challengers while United faded, sacked Mourinho and appointed Ole Gunnar Solskjaer.

Mourinho was subsequently declared a "busted flush," outmoded by more stylish progressives like Guardiola and Jurgen Klopp. And so, in a week when Guardiola signed a contract extension to stay at City until 2023, Mourinho will have revelled in the timing of Spurs ascending to the top of the table with a win that represents a victory for the essence of his dogmatic, disciplined style over Guardiola's zeitgeist.

Guardiola: Too old for sparring with MourinhoMourinho's first year with Tottenham showing signs of successMourinho: I'm now 'The Experienced One'

After taking the Spurs job, Mourinho argued he had changed as manager, using an 11-month hiatus from management as a period of introspection to alter his perspective. There are signs he has softened in some ways, certainly if you take his Instagram account at face value, and the players often speak of a more approachable man than his reputation had suggested.

But in the big games that matter most, Mourinho reverts to type just like this: defensive, disciplined, combative and aiming to be clinical on the counter-attack. Spurs might not be changing Mourinho but he is changing Spurs.

The surprise is not any indication Mourinho's methods have radically shifted. It is that his so-called old-school tactics might yet still be effective for a long enough period to challenge for the Premier League title.

The sterilised environment necessary for football to continue amid the coronavirus pandemic arguably helps any team set up like this. Imagine, for example, the Newcastle fans' anger were 55,000 of them packed into St James' Park watching them barely try to attack earlier on Saturday.

And here, at 0-0 and even at 1-0 up, while the fans would have undoubtedly bought into the spirit and commitment Spurs showed, the atmosphere would inevitably have been laced with a mixture of apprehension and frustration at the sight of the home team camped on the edge of their own box for long periods. As it was, the only sound reverberating around this wondrous arena was two sets of players, staff and entourages contesting every decision referee Mike Dean made, starting at a level of extreme apoplexy and going up from there.

Jose Mourinho and Tottenham have been the surprise package in England and look to be genuine title contenders. Photo Neil Hall - by Pool/Getty Images

Mourinho was at his most vocal when Spurs lost the ball, particularly in the City half, screaming at his players to regroup and close down the space for Kevin De Bruyne to conjure a chance.

Pierre-Emile Hojbjerg was excellent in this regard, personifying throughout the positional intelligence and doggedness Spurs required to keep City at bay.

Son Heung-min was shrewdly deployed on the right as opposed to his usual station on the left flank to avoid a close pace race with Kyle Walker. That tactical tweak led to the opening goal as City switched off, allowing Tanguy Ndombele to float a pass through for Son, who saw Ederson rushing off his line before slipping a shot through the City goalkeeper's legs.

Both sides had a goal correctly disallowed -- Harry Kane for offside and Aymeric Laporte for a handball by Gabriel Jesus in the build-up -- but City created precious little after half-time, Ruben Dias forcing Hugo Lloris into a stoppage-time save with a header from a De Bruyne's free-kick.

This was a performance that will prompt questions about the depth of the rebuilding job Guardiola has on his hands to re-establish their domestic superiority and win the Champions League crown he craves.

Kane was everything Jesus wasn't, fighting tireless to keep the ball and providing further examples of his eye for a pass, slipping in Giovani Lo Celso to double Tottenham's lead on 65 minutes. Lo Celso had been introduced as a substitute for Ndombele just moments earlier. This was a day when everything Mourinho tried came off. The only downside for Tottenham was a muscular injury to Toby Alderweireld, who limped off with nine minutes left, Mourinho admitting afterwards the early signs were not promising.

Of course, this is not the first occasion that Mourinho's Spurs have beaten City. They managed a win by the same score in February but finished last season scrambling for sixth with City, a shadow of their former selves, still 22 points better off. This time it was not an aberration, instead the continuation of a fine start, the club blending tireless defending with clinical finishing to takes them top of table and eight points ahead of City, albeit having played a game more.

It will be fascinating to see how far it can take them. City will surely flex their financial muscles in January now that Guardiola has committed himself to the club. Liverpool remain the team to beat while Chelsea's £220million summer spree also has them aiming high.

While Spurs and Mourinho were told their best days may be behind them, together they now look to be right in the title mix again